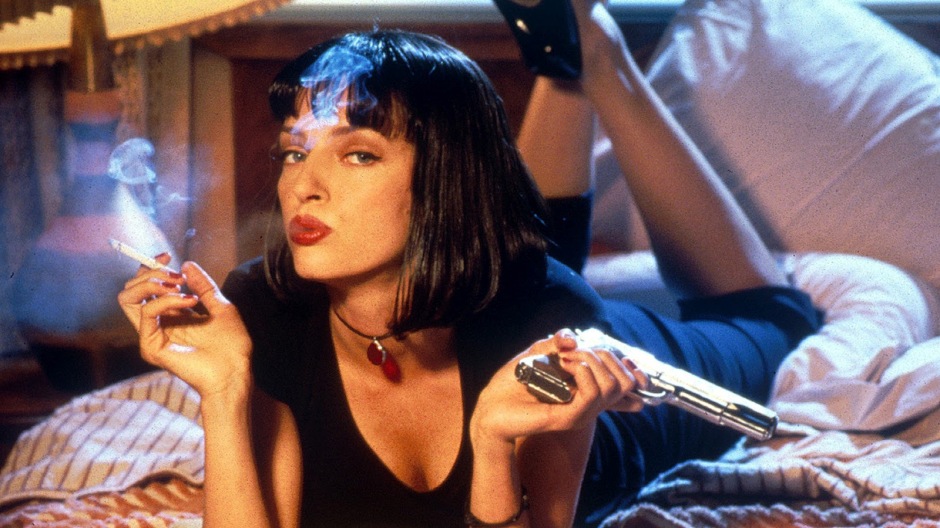 “It is hard at times while watching Tarantino movies, especially Pulp Fiction, to remember  that I am actually watching a film and not just shooting the shit with some friends…”

Recently I was fortunate enough to see a back to back showing of The Hateful Eight and Pulp Fiction. This review will be focusing on Pulp Fiction, so if you want to read my review for The Hateful Eight, you can click here. For those who don’t know, Pulp fiction is a film with multiple story lines interwoven ever so cleverly. It is difficult to give a plot synopsis because of this, but essentially it is a movie that focuses on the life of crime, with stories of some gangsters, a boxer, and a mean son of a bitch by the name of Marsellus Wallace. The movie is not super action packed, though it does have some great action scenes, but it has a lot of charm. It is kind of hard to sell someone on this movie by the plot, so I would say that if any fibre in your body is at least a little bit interested in watching Pulp Fiction, do it. I can see why some people wouldn’t like the movie, but it is my personal second favourite movie ever made, and I think everyone should at least give it a shot.

Pulp Fiction was the second film made by Quentin Tarantino, and the one that really got his name out there. This movie was nominated, and won, many awards that really helped jump start Tarantino’s career, and it was well deserved. Pulp Fiction is an early example of a film with non-linear storytelling, and in my opinion one of the best. It really doesn’t hold your hand when it jumps forward or backwards in time, relying on you to figure out at what point in the story any particular part took place based on context clues (clothing, dialogue, setting, etc.). The writing in Pulp Fiction is something to really behold. The movie takes very interesting characters, each with their own opinions (much like real life), and throws them into really fucked up situations. This allows for the characters to really show their true colours, and the dialogue is often hilarious. As I said previously, the film is not ripe with action scenes, but that doesn’t mean it is boring. Even when there is nothing going on in this movie, I find it hard to not be entertained. The characters could be talking about something as mundane as what a Quarter Pounder is called in Europe, and I am completely enthralled. That is a skill that not many writers today exhibit, and it is why I am such a huge Tarantino fan. All of the characters he writes seem so real. It is hard at times while watching Tarantino movies, especially Pulp Fiction, to remember  that I am actually watching a film and not just shooting the shit with some friends. And as I said earlier, I understand it may not be some people’s “thing” to watch a movie with just a few characters on screen at a time talking about things that have little bearing on the plot itself, which is why I understand that Pulp Fiction may not be for everyone. Not only is the writing phenomenal, but the acting is what really brings it to life. The conversations had by Vincent (John Travolta) and Jules (Samuel L. Jackson) seem like conversations that friends would have on the set of making a movie. It’s incredible to me that the dialogue was written, because it just sounds like a couple of guys chewing the fat while waiting to be called to set. It isn’t just the conversations that have great acting though, all around this movie is a masterpiece. John Travolta does a great job acting panicked and petrified when he needs to, but also he did a great job at acting completely high. Bruce Willis also did an amazing job in this movie, my favourite example is the scene with him and Marsellus in the basement. The way that Bruce Willis hangs back and acts almost like a kid who knows he is in trouble, really encapsulates the relationship between the two characters.

Another aspect of Pulp Fiction that I think was flawlessly executed was the set design. It is almost as if the locations themselves are a character in the scene  with how well they mesh with the tone and dialogue that take place. One example is the hotel room that Butch (Bruce Willis) is staying in. It is dungy and drab much like the feeling of impending danger that I’m sure Butch felt, but it also feels oddly warm, which helped convey the happiness and love that Butch and Fabienne felt for each other. There are many other examples I can give, but in the interest of time and keeping some things a surprise, I will forego pointing them out. Pulp Fiction also has some instances of great camerawork. Many of these techniques have been perfected by Tarantino over the years, but there is still definitely some brilliance in these shots. Some examples include the camera spinning around the phone booth while Butch is taking a call, as well as the many POV shots used, like the one from the trunk of the car as well as the one during the gold watch scene. And of course I have to talk about the soundtrack, and just the general use of music. The soundtrack is amazing, much like other Tarantino films, the music used is very fitting to the period and tone of the film, and there are some really fucking catchy songs used. The use of music is also something that I adore. From the opening credits song being changed halfway through like someone channel surfing on a radio, to the way that some music, even though you would have guessed it was atmospheric, was muffled when a character walked into another room.

Seriously, there is not much more about this movie I can really say, other than that it is a unique and enjoyable experience, and I think everyone should see it at least once.

The following will have some spoilers for Pulp Fiction. You have been warned.

One thing I noticed this time while watching through Pulp fiction has to do with the gold watch scene. Not only does Butch go through hell to get, and then keep, the watch much like his father, but something Koons said stuck out to me. He said something along the lines of when you go through something traumatic with someone, you become close, and there are certain duties you feel obligated to do for them. I’m aware that the specific example he was talking about was delivering the watch to Butch, but I can’t help but shake the feeling that there is a parallel there between Butch and Marsellus as well. Let’s be honest, what they went through was fucking terrible, and you can see that before Butch leaves, he catches himself and ultimately decides to save Marsellus. You could argue that he did that for purely selfish reasons (getting even with Marsellus), but I can’t help thinking that it is not dissimilar to what Koons described. Much like in the army, you may not initially like the men you are fighting alongside, but the fact that you are fighting alongside them makes you feel obligated to do whatever you can to protect them. I think that even though before they got into that situation, when Butch was almost killed by Marsellus and then Marsellus almost killed by Butch, the fact that they were thrust into a situation like the one they were made Butch feel an obligation to help Marsellus. Because at that moment, Marsellus wasn’t the bad guy to Butch, nor was Butch the bad guy to Marsellus. Instead it was the hillbillies fucking Marsellus in the ass that were the bad guys to both of them.

One thought on “Pulp Fiction Review”