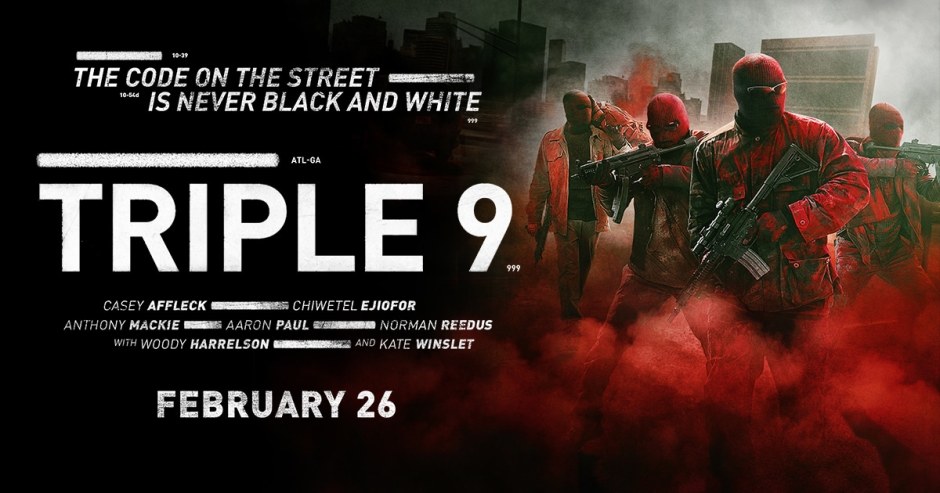 “…so much more than the run of the mill action movie…”

I’m a sucker for action movies, so when I saw a trailer for the movie Triple 9, needless to say I was excited. The trailer showed me a fresh-faced cop (Casey Affleck) who is partnered up with a dirty cop (Anthony Mackie) and the tribulations that come with that as well as some awesome gunfights and some Woody Harrelson. So I went into this movie expecting a run of the mill action movie which isn’t to say it wouldn’t be good, just that it is good fun. Boy was I wrong.

The movie opens with a ‘collage’ credits sequence that has been done to death by action films. It greets us with various clips of news footage, and a clip of a dog barking for some reason, that I believed would set the tone for the movie. We are then instantly thrust into a bank robbery scenario, and that’s when I knew I had misjudged the movie. The action scenes in this movie are so intense and well done it deserves a round of applause. We first meet this group of bank robbers, and then we see some of them go to their day jobs as police. This is where we are introduced to the rookie, Casey Affleck. When I say rookie, I don’t mean he is a new cop, I just mean that he is new to the terrible corruption and graphic violence that Atlanta apparently has to offer. That’s another thing I want to congratulate this movie on, not setting the story in some cop-out (no pun intended) city like New York or Los Angeles. This movie did a great job of making me terrified of a completely new city, and that is a feat that is not so easily accomplished. Anyway, Casey Affleck is then partnered up with Anthony Mackie (one of the bank robbers from before), and then we see kind of a Training Day type relationship between the two where Anthony Mackie has to give a cliché speech about this district being different for cops and shit. That’s not to say this was a bad thing, it just touched on a trope that many cop dramas do. The movie then delves deeply into the lives of the Russian mob, some other gangs, and of course our bank robbers from before. The movie includes spectacular acting from Anthony Mackie and Woody Harrelson, along with Kate Winslet who played a character that was so different from the ones she has portrayed before. Other performances were kind of lukewarm to me including Casey Affleck who plays Casey Affleck and Aaron Paul who plays Jessie Pinkman for the majority of the movie. And I was absolutely floored by the surprise cameo of Michael K. Williams.

As I said before, the movie includes action scenes that are really intense. I’m not a fan of comparing movies to other movies, but it really gave me a Sicario feel. For those who don’t know, Sicario is a gritty look at the Mexican cartel with many intense action scenes and great performances, which I felt Triple 9 also had. One thing that I admired from the two movies was the sound design. Sicario had overall great sound design, while I think Triple 9 had moments of brilliance with one example being the sound becoming “shallow” when a character was close to a gun going off. That really helped immerse me into the movie and feel for the characters. I did have a few problems with the movie though. Periodically, the movie would switch from a crazy intense drama, to scenes of Woody Harrelson just being a cop. I understand that this was most likely to showcase that there are other things going on in the movie, but I felt those scenes shifted the tone from “intense action drama” to “run of the mill cop drama”, and that kind of hurt the movie for me. The ending of the movie also felt out of place. I honestly felt that the movie could have ended 15 minutes sooner without stooping to the “happy ending” and it would have been a far stronger film. Another thing that didn’t make sense to me was toward the end of the movie, location cards just started showing up in the bottom left corner of the screen. I’m not sure if it was to show us how far away the locations were, but even if it was it doesn’t make sense because you would have to be well versed in the knowledge of streets in Atlanta to get anything from it. And then of course there was the scene that proceeded it which would have shown us how long it took to get from one location to the other when some of the characters do just that. I also noticed that in Atlanta, not only does crime run rampant, but nobody pulls over for a fucking parade of cops flying down the street with their sirens on. That is another nail in the coffin for me ever wanting to visit Atlanta.

To sum it up, I think Triple 9 was a great movie with spectacular acting and action scenes, but it is not without it’s flaws. What I do want to point out though, is this is so much more than the run of the mill action movie, and I’m afraid people aren’t going to give it the credit it deserves.