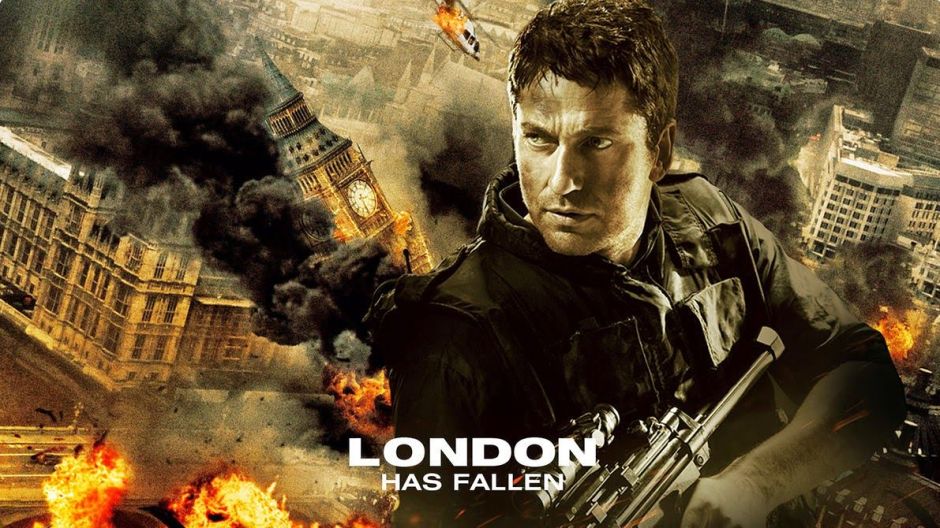 “It does drag a little in the middle, but it makes up for that with heart pumping action scenes.”

I’m not going to lie and say that I wasn’t worried when I decided to go and see London Has Fallen this morning. Usually I try to not read reviews for movies that I plan to review, so as to not assimilate ideas of others into my thoughts, but something just kept calling for me to check some of the countless reviews for London Has Fallen. All of the reviews I read were lukewarm to say the least. This disappointed me because having just watched (and loved) Olympus Has Fallen, I was pretty excited to see the sequel. So, unfortunately this movie experience started out with pre formed opinions. The movie sees the return of Gerard Butler as a superhero-like man tasked with defending the president, when instead of the White House being attacked London is attacked. Really that’s all there is to it. It is an hour and 45 minutes of Gerard Butler and Aaron Eckhart running around London killing terrorists who are in turn trying to kill the president (Aaron Eckhart).

For about the first 20 minutes of the movie I had convinced myself that all of the reviews were right, and that I was an idiot for paying ten dollars to see this movie. But then it happened. I started having so much fun watching this movie, I couldn’t give a shit about my preconceived notions. I’m not sure where the turning point was exactly, maybe it was the absolutely intense shoutout that leads to a kick-ass car chase throughout the streets of London, now that I think about it that probably was the turning point for me. I panned the first movie for having effects that were not up to par. And by not up to par I mean that it would be preferable to gouge my eye out with a corkscrew than have to endure the poorly rendered and completely “plastic” look of the shitty special effects that Olympus Has Fallen had to offer. I’m not going to lie, London Has Fallen had better CGI than the shit show that was its predecessor, but not by much. In fact, by the smallest increment that you can imagine. One thing I will applaud them for is they figured out that if you cover up a shitty looking collapsing building with shitty fake smoke, then it looks marginally better. And hey, at least they had the budget to spring for real fucking helicopters in London Has Fallen. But we’re here to talk about London Has Fallen, not compare it to the first film in it’s franchise(?). Overall I thought London Has Fallen was a great action movie. The witty dialogue was at least doubled from the first film, and honestly it had me laughing out loud a couple of times. A lot of that comedy came from the relationship between the president (who from now on I’m just going to call Aaron Eckhart) and Gerard Butler. The premise of this movie (and its predecessor) is that Gerard Butler and Aaron Eckhart are friends, even though Gerard Butler is an employee tasked with protecting Aaron Eckhart. And that relationship really gets to be expanded upon in this film where you get to see not a secret service agent and the president running through London, but two friends running through London who just happen to be a secret service agent and the president. And like I said, a lot of the comedy comes from this relationship, specifically how casually Gerard Butler speaks to Aaron Eckhart. It’s like the dude doesn’t give a fuck that he’s speaking to the president. Though he does have a good excuse seeing as he’s saved the president’s life THREE TIMES NOW (seriously, should a man that unlucky be running a country?).

The movie unfortunately slows down in the middle when the action comes grinding to a halt. In this portion of the movie, we get to see Morgan Freeman do pretty much exactly the same thing he did in the first movie, but this time Jackie Earle Haley is in the room with him. This is kind of disappointing because Morgan Freeman serves no apparent purpose other than providing a location that the filmmakers can cut to when our two main characters need to be somewhere else and the movie can’t show the characters walking through all of London (though that may have been more enjoyable than what we got). It’s too bad because in my review for Olympus Has Fallen, I wrote that Morgan Freeman gave the best performance that he had given in a while, and in London Has Fallen he just kind of slumps back down to mediocrity. Overall I felt that the scenes with Morgan Freeman and the rest of the supporting characters were just filler in the middle, which really slowed the movie down, but then the movie comes back in a fucking huge way. The last act of the movie is some of the best shot, most fun action I have seen in a while. There is a beautiful tracking shot of a gunfight in an alleyway that just put a permanent grin on my face. And then I felt that the movie ended pretty well.

Overall, London Has Fallen was a really fun action movie, with some hilarious lines. It does drag a little in the middle, but it makes up for that with heart pumping action scenes.

I give London Has Fallen a C

And I can’t wait for the next film in the franchise:

The president is in Africa helping to build wells when the entire continent gets taken over by terrorists. Gerard Butler then has to save his friend by getting him back to the safety of America.

This will lead into nicely to the finally of the “…Has Fallen” quadrilogy:

Join Gerard Butler and Aaron Eckhart as the defend the earth from terrorist Aliens who have come from another galaxy to, you guessed it, kill the president!

(p.s. If anyone from Hollywood wants to use either of my kick-ass ideas, they are free for the taking so long as I get a writing credit in the film. Also I would like to meet Gerard Butler, but I will be happy settling for just my name in the credits.)