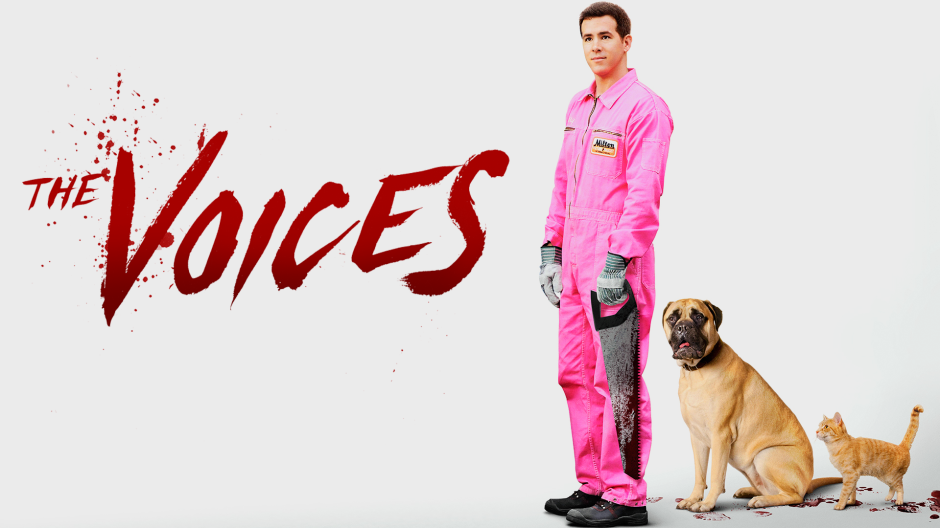 “…favours heavily on the dark side of dark comedy.”

I started writing reviews at the beginning of this year because I have opinions and no one to share them with. When I started writing reviews, I realized that when sharing my opinion about even something as trivial as movies, I felt relived. I felt relieved because even though I know no one is reading my reviews, typing out my feelings helps me feel like I’m not alone. When I watched The Voices last night, it made me feel alone again. The Voices is a movie that connected with me so severely, that I felt sick for the rest of the night after I watched it. In The Voices, Ryan Reynolds plays a man who has a mental illness and feels alone in the world. So alone, in fact, that he personifies his cat and dog in his head, just so he has people to talk to when he is at home. I haven’t gotten to the point where I have full discussions with things that shouldn’t be talking, but I do often find myself conversing with myself. The Voices is categorized as a dark comedy, and though there are some funny parts in the beginning it was hard for me to finish the movie with a smile. In the documentary It Might Get Loud, The Edge is quoted as saying “Spinal Tap. That’s a movie that I watched. I didn’t laugh. I wept. It was so close to the truth”. That’s not much different to how I felt about The Voices. Sure it started out funny, but by the end when Ryan Reynolds’ character was at the end of his rope, what I was seeing hit too close to home for me to find it funny.

After watching The Voices, I really started thinking about everything. It was a movie that I needed to decompress after watching. I kept thinking to myself what rating I would give it. Now usually, I don’t have this much trouble coming up with a rating, but I really started thinking about ratings in general. I started thinking about how arbitrary a rating system is for art. I wouldn’t rate a Leonardo DaVinci painting out of 5, so why is it common to rate movies or music on that scale. At the end of the day all three products are art, and art effects people different ways. I really started thinking about all of this because the rating that kept popping into my mind for The Voices was a perfect score. Now, most people, myself included, would equate that to being a perfect movie, but The Voices wasn’t a perfect movie. What The Voices did that no movie has done so well since Punch Drunk Love, is it touched me. It made me take a good hard look at myself. And that is what art should do. Not make you reflect on yourself, but make you feel. And that is why I started thinking about how stupid ratings are, because art effects people differently. My favourite thing to shout at my friends when they did’t laugh at a joke I made is “Art is subjective!”. But me yelling that, even in jest, comes from a place of truth. Every single person on this planet is different. And I’m not just talking about the obvious differences like how good your childhood was, or what race you are. Shit, two people could look at the same picture and one person may not like it because he had eggs for breakfast. The point I’m trying to make is that art is subjective, so to base your opinion of a piece of art on a rating someone gave it is wrong. Now I’m not thinking that people are taking my word on movies as gospel, because as I pointed out earlier no one reads my reviews. And I’m aware that many people, such as myself, use movie reviews as a means to gauge weather or not we would enjoy the movie, not necessarily whether or not the movie is good. I’m not sure why I felt the need to go over that, but like I mentioned earlier writing reviews is a form of therapy for me and this is just what I had to get off of my chest today. Just keep in mind that my reviews are only there to help me. If other people want to read them it is fine, but my word is not gospel. Art has to be experienced, because every single person brings different baggage with them into that experience. And keep in mind that unless otherwise stated, me giving a perfect review score does not mean that the movie was perfect.

I feel that I have vented enough for today, so now I’ll get into the objective “what I did/did not like”.

To start I would like to say that the story of The Voices, though a little silly at first, was a very personal one for me. One of the main things that made the film hit so close to home was the performance that Ryan Reynolds gave. At the beginning of the movie you see a man who is almost Ted Bundy-esque, but by the end of the movie you see a man that is truly broken. Ryan Reynolds absolutely killed it in this movie, and I think it may be his best role. The next thing I want to address is that this movie is not as much of a comedy as the marketing may have led you to believe. This movie does have comedic elements, but it favours heavily on the dark side of dark comedy. I absolutely loved the use of visuals in this movie. The workplace of the main character is just a  cornucopia of bright colours, and honestly it reminded me a lot of Edward Scissorhands. Not only that, but I loved how the environment would change based on the main characters state of mind. Some of the changes were really blatant, but others were really subtle, and just added to your sympathy for the character. The music also help accentuate the feeling of the “real world” in the movie. Sure, it was a little ham-fisted (one of the songs literally being called “Happy Song”), but I felt it made sense based on the complex mind of the character. Honestly, there wasn’t anything I disliked about the movie except for the end (which I will go into detail about after my rating) but even that didn’t sully the rest of the movie.

I give the Voices an A

THE FOLLOWING WILL HAVE SPOILERS FOR THE VOICES, PLEASE DON’T READ IF YOU HAVEN’T SEEN THE MOVIE.

Honestly, the only thing that didn’t sit right with me was the ending of the movie. And when I say the ending, I mean the very ending. It was weird to me that the characters broke out into a dance number in the mind of the main character because to me that symbolizes that he was at peace when he died. And it didn’t feel that way to me. I guess you could argue that the little “scene” that happens directly before the dance number was him coming to terms, but if that’s the case then it happened really quickly after what he was feeling not ten minutes before. Like I mentioned, it’s not a big deal it just seemed out of character to me. The movie is still absolutely fantastic though.

One thought on “The Voices Review”