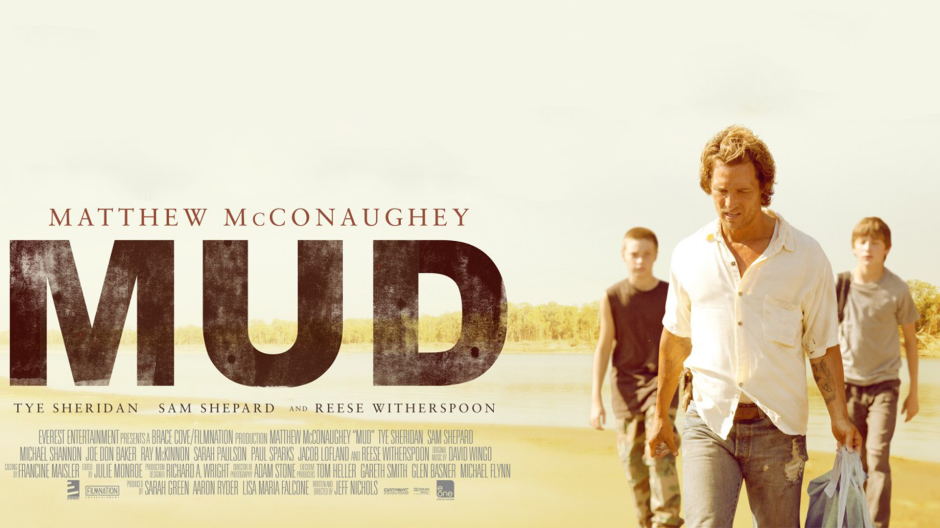 “There are still dark tones in Mud, but the way they are presented allow many moments of levity to get in there as well.”

Mud is the third film by writer/director Jeff Nichols and it is about two boys who come across a seemingly homeless man named Mud. The boys agree to run various errands for the man in exchange for the boat he is currently living in. The movie is really a coming of age story about the main character named Ellis. Ellis is a boy who is fourteen (or at least around there) and therefore doesn’t know much about the world yet. In the movie we are privileged to see him shape his own outlooks, as well as be informed of the outlooks of others. This is very vague, but I will go into more detail later.

Honestly, I think Mud is my favourite Jeff Nichols film (so far), but that is a tough call to make. I don’t have any children, but I assume this is what it is like to pick your favourite child. Each movie (child) has it’s own merits, none of them are bad, as a matter of fact they are all great, but this one just has something special. Maybe it is because I relate to the main character who is very distant with his father and instead tries to find father figures in others. Maybe I relate to the story itself because fuck if I know how the world works. I kind of just drift through life aimlessly, and much like the main character, I have to learn some experiences through the teachings of others. So I mentioned that this movie is different from its predecessors (or maybe I didn’t; maybe I was just thinking it) and that is not a bad thing. The best way to describe the feeling is that the other two films by Jeff Nichols (Shotgun Stories and Take Shelter) both felt ‘tight’. By that I mean, they are very contained stories, about a few people, or even one person. In Shotgun stories you got the story of a feud between two families, and the story never really expanded past that. In Take Shelter, that was even scaled down more because you got the story of one man and the movie never really went past that (I guess you could say that it was about a family, which I agree that by the end of the film it is about a family, but it is still very much about that one man’s journey). Mud is different in that it doesn’t feel like a ‘tight’ story, as a matter of fact it feels like quite the opposite. Mud is like a story that could keep going on forever (not literally, but figuratively). Sure the movie focuses on the main character, Ellis, but it also focuses on his friend Neckbone (and Neckbone’s uncle), Mud himself and his entire life, and a whole slew of supporting characters, each with enough importance to the story that this movie becomes more of an ensemble piece. And this is what I was talking about when I mentioned different outlooks earlier. This movie is specifically about love (or at least love is a major theme) and the perspectives on it. Ellis is just a boy so of course he has to learn things for himself, through either experience or advice from others. He sees/hears many different perspectives on the subject throughout the movie, and by the end you have a more mature character who has now learned something about the world (or in this case love). Of course there are many more things that he has to learn, but for now he pretty much has a good grasp on love. And it is interesting to see the different perspectives on love come from people in different stages of their lives, all with different pasts. I believe Ellis also learned a little something about life during the events of Mud as well. I know I sound like an after school special, but that was me breaking down what I love about this movie in the most basic way I could.

Again you have great writing by Jeff Nichols, but this time I felt I got to see a little bit more of the fun side of his writing ability. In his previous films, there were very dark tones, and a story that mirrored that. There are still dark tones in Mud, but the way they are presented allow many moments of levity to get in there as well. I feel part of that may have been because the story was from the perspective of a child, but either way I loved it. The cinematography in Mud was also phenomenal, and I found that it really focused on the beauty of the surroundings. Now, in fear of sounding like a broken record I will say it again; I feel that this was because it was from the perspective of a child. In the other two movies, the main characters were people plagued with guilt and anger and even paranoia, but to sum that up, they were adults. Adults have problems that kids don’t have, so obviously they see the world differently. Adults (or at least most of them) see the world as a problem, and very seldom get to enjoy it. Kids, on the other hand, haven’t learned enough about the world to know that it is a problem so they still see it as a beautiful playground. Maybe I am looking too far into it, but let’s just say that the cinematograph was great. Another thing about Mud that is amazing is the acting. The movie had to be carried by two kids, which is not an easy task to accomplish. I’m not sure of this specific instance, but I know that a lot of the times when there is a good child actor performance, it is because of the director doing a great job. That is not to diminish the accomplishments of child actors (god knows they have accomplished more than me), but it makes sense that the director would have to manipulate (for lack of a better word) them to get the perfect reaction, or take. Again, I’m not sure if that was similar to the filming of Mud, but let’s just say that however it was accomplished, the acting of Ellis and Neckbone was wonderfully done. Of course you have Matthew McConaughey, who is good in everything (recently), and you also have Michael Shannon. I have confessed my love for Michael Shannon previously, and he plays one of the funniest roles I think he has ever played, Neckbone’s uncle, Galen. Galen is kind of a scumbag bachelor who is tasked with raising his nephew. He also has one of the best movie speeches in history in this movie. I talked about cinematography, but I forgot to mention that the shots Jeff Nichols has in Mud are also pretty great. You can tell that by Mud he is becoming more comfortable behind the camera because he is starting to use more elaborate shots, of course without overdoing them. The soundtrack for Mud is also pretty great, again it is more upbeat than the soundtracks of the other two films. There is one gripe I have with the soundtrack and that is during one of the early scenes, there is a song played with lyrics. I’m not a huge fan of songs with lyrics playing during a movie unless they fit the movie perfectly (like Reservoir Dogs), and unfortunately this is no exception. I think the music itself was good, but the singing that occurred was a little over the top for my taste. Again, the movie feels longer than it actually is, much like the other Jeff Nichols movies, but I won’t reiterate that point again. The last thing I have to say is that there were some audio issues that I ran into while watching Mud on blu ray. Of course this could be any number of things from the blu ray itself, to my set up for watching blu rays, or it could be an issue with the movie. I’m not sure because I only have the one way to watch it, but if anyone else watches Mud and runs not audio issues (it sounds like the voices start off quiet, and then get turned up suddenly) let me know.

Overall Mud is a great coming of age story, that is both fun and emotional. It has great acting, great writing, and you really con’t go wrong by watching it.

I give Mud an A