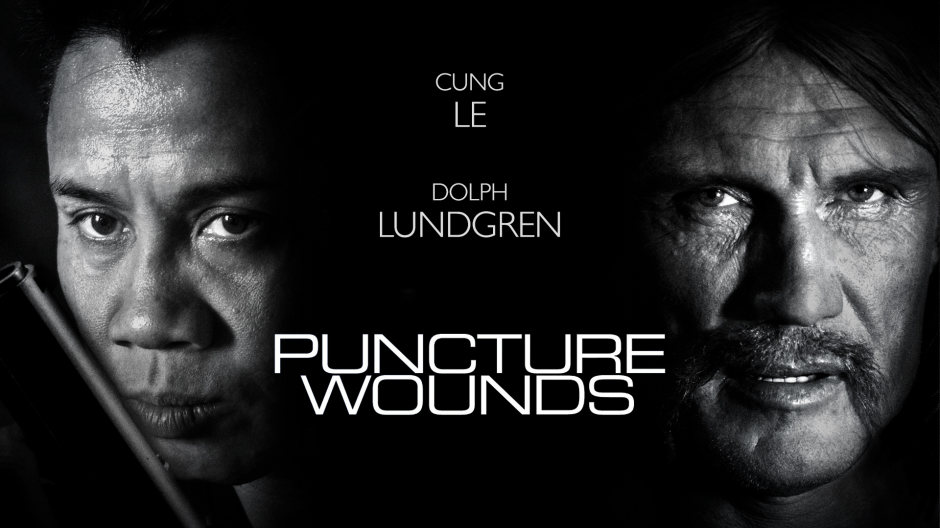 Last night I decided to watch Puncture Wounds and holy shit was it a terrible choice. Puncture Wounds is a movie about a war veteran who (apparently) has P.T.S.D. that angers a high-level gangster by killing some of his thugs who were beating up on a woman. This veteran then turns into the Punisher and decides to kill literally everyone he finds. The movie surprisingly had a script that was written by a real person, and was also directed by someone who doesn’t appear to have brain damage, so I’m not sure where everything went so wrong.

Puncture Wounds is one of the worst movies I have seen in quite some time. Every single aspect of this film is a testament to bad filmmaking. Let’s start from the top: the movie opens with a montage of a slow-motion fight scene. The movie then, with no explanation, cuts to a different montage outlining and showing every single action scene that takes place in the movie. This is narrated by our main character who sounds like he is speaking english for the first time.The movie then breaks out another montage (I’m not kidding) full of stock footage and shitty guitar riffs, which is used to name every single actor that we will be seeing in the next hour and a half. I wouldn’t be exaggerating if I said the beginning of Puncture Wounds was akin to the shittiest music video you have ever seen. So the movie finally starts and I realize that it is not the actor doing voiceover that is butchering the dialogue, it is just poorly written dialogue. I wouldn’t be surprised at all if I found out this movie was written by a thirteen year old boy. “Why?” I hear you ask; well let me tell you. The plot of Puncture Wounds consists of only the most basic story elements: good guys and bad guys. How do we know who the good guys are? They were in the army. How do we know who the bad guys are? They only call people racist names and they swear a lot. That coupled with the fact that there is not one, but two shower scenes that are exactly the same (the same woman is on both of them), and the movie conveniently has two women fucking each other in front of a crowd when we finally see the home of the “villain”. Oh, and did I mention that the villain is Dolph Lundgren in a fake moustache and a wig? I think it goes without saying that I hated the acting in Puncture Wounds; most of the actors were seemingly there only for the pay check. The main actor, Cung Le, is a kick boxer turned actor which would explain the performance; and even though I just found out he was a kick boxer, deep down I always knew. Throughout the movie any fight scene featuring the main character shows him doing what I would call karate, and every time he hits someone it is in slow motion. That just screams desperation to me. The director obviously chose Cung Le for a reason (and it wasn’t for his acting ability) and he fucking milked him for all he had. This wasn’t just sorely out of place, but it also highlighted the terrible editing in Puncture Wounds. You see, while making sure to get every single kick on camera in slow motion, there are many times when some dudes get kicked twice or guys disappear; you know the usual telltale signs of bad editing. Do I blame the editor? Not necessarily, like I said the director most likely had a hard on for fight scenes so the editor was told to keep every punch and kick in the movie. Dolph Lundgren was just kind of there, always lumbering through scenes and lazily hitting a punching bag whenever the director needed his fighting fix. The truly sad part was that some of the actors in Puncture Wounds were actually good (with what they were given anyway). Vinnie Jones essentially played Vinnie Jones, but it totally worked; Briana Evigan (who played the woman who took two very sensual showers) was actually not bad, and even John Kawalski (who played the other army veteran) wasn’t terrible either.

I don’t feel that I need to mention the effects in this movie, because as you can guess they were terrible. One thing I do want to mention is the use of lens flares. For those of you who don’t know what lens flares are, they are those annoying blue streaks of light that always appear in JJ Abrams movies; and in Puncture Wounds they were taken to a whole different level. I don’t know what possessed whoever worked on this movie to have so many lens flares, but whatever it was is pure evil. It wasn’t just the amount of lens flares that sucked, it was there intensity. One scene that comes to mind is when a character is sitting in front of a window that has blinds on it. The lens flares in that scene create distinct blue lines that cover the entire fucking screen. It is so distracting. And even shit that shouldn’t be emanating light had lens flares, for example a characters jacket had lens flares coming form its shoulder. That doesn’t even make sense. At least the fact that half of the frame was constantly out of focus was able to dull down the bright blue lens flares. But it wasn’t only the lens flares that gave me a headache, it was also the terrible music. You see, much like during the third montage at the beginning of the film, the music throughout the movie was clearly from some shitty stock website and it mainly consisted of heavy metal guitar riffs repeated over really loud drums. Occasionally you would get a different genre of music, but they were all equally annoying and loud. I don’t really want to discuss the story in great detail, but I just want to say that even the underlying message was flawed. Puncture Wounds provides a skewed view on both P.T.S.D. as well as Vigilantism all wrapped up in one shitty package.

Now I’m going to give this movie a terrible score, as you may have already guessed, but don’t get me wrong; I really enjoyed watching Puncture Wounds. It was a terribly fun movie to watch and laugh at. So I wouldn’t recommend this movie unless you enjoy watching pure, unadulterated shit; and luckily, I do.

Ultimately Puncture Wounds is a movie that is a preteen boy’s wet dream. It has violence, it has cursing, and it has naked women. Unfortunately, there is not much there for anyone with a fully developed brain.

I give Puncture Wounds a D