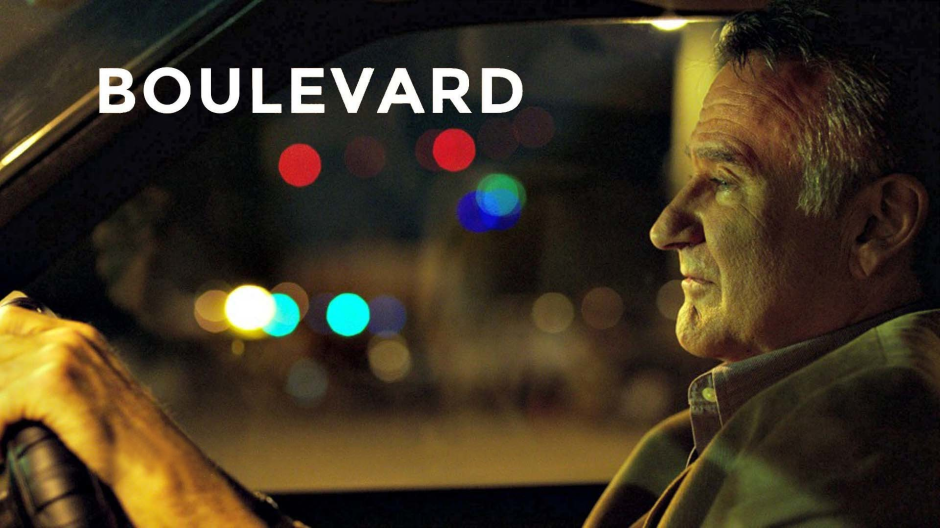 “… a movie that is well shot and wonderfully acted, but not one that kept me interested throughout.”

Last night I watched Boulevard, and honestly it wasn’t great. For those who don’t know, Boulevard is a movie about Nolan Mack, a married banker, who finally gives into his sexual urges by meeting with a male prostitute named Leo. The film stars the late, great Robin Williams as Nolan and Roberto Aguire as Leo.

Now when I said this film is great, I didn’t necessarily mean that it was bad. What I meant was that it just wasn’t a particularly good film. One of the bigger issues I had with Boulevard was that it had a very laid back approach to its story telling. Because it seemed that the movie had so little care for the story it was telling, that translated into me not really caring about the movie. There were some really great parts of the film, many coming from the performances of Robin Williams and other characters who interact with him, but overall the film just felt insignificant.

The story starts off by making you rely on clues to figure out what is happening. It is not too difficult to piece it together, and then later on it is told to you via monologue by the main character. This is fine, but it created this mystery in the beginning of the film that I felt was unnecessary. The film then culminates into a wonderful scene between Nolan and his wife, Joy (Played by Kathy Baker), but then it just kind of ends. There isn’t really any closure, except for the fact that the main character is finally happy, I guess. But to me, it wasn’t really important that the main character was happy, because I was introduced to him via this story, which now appears incomplete. All of the ‘in-between’ stuff in the film was fairly interesting, but again it was presented in kind of a laid back way, so it didn’t seem important. Also, a few of the plot points of the film seemed very familiar to me, although I’m not sure where I have seen them before and I won’t hold that against the film because it did feel like its own thing.

Like I mentioned, the film is pretty much saved by the performances given throughout by both Williams and other characters. It is kind of strange because the other characters, mainly Nolan’s supposed best friend (played by Bob Odenkirk), didn’t really get enough screen time for me to get a feel for their relationship. This caused an almost awkward tension when I would see the pair onscreen because it always seems that something was not quite right. Of course the film is about one of the friends essentially lying to the other, so it makes sense for it to feel like that, it just would have been nice to have more of a glimpse of Nolan’s relationships before this particular story started.

Moving to technical aspects the first thing that I noticed was the music. Throughout the beginning of the film there is a beautiful score that mixes classical interments with more modern sounds which culminates to wonderfully atmospheric experience. The problem is that as the movie progresses, the music continues to lose this ‘charm’ and become more generic and essentially fade into the background. I also really liked the camerawork in Boulevard, because of its interesting uses. Mainly the camera really utilized reflections which allowed for the film to feel real, as well as allowed for wonderfully shot scenes that perfectly encapsulate the feeling of the film.

Ultimately Boulevard is a movie that is well shot and wonderfully acted, but not one that kept me interested throughout.

I give Boulevard a C