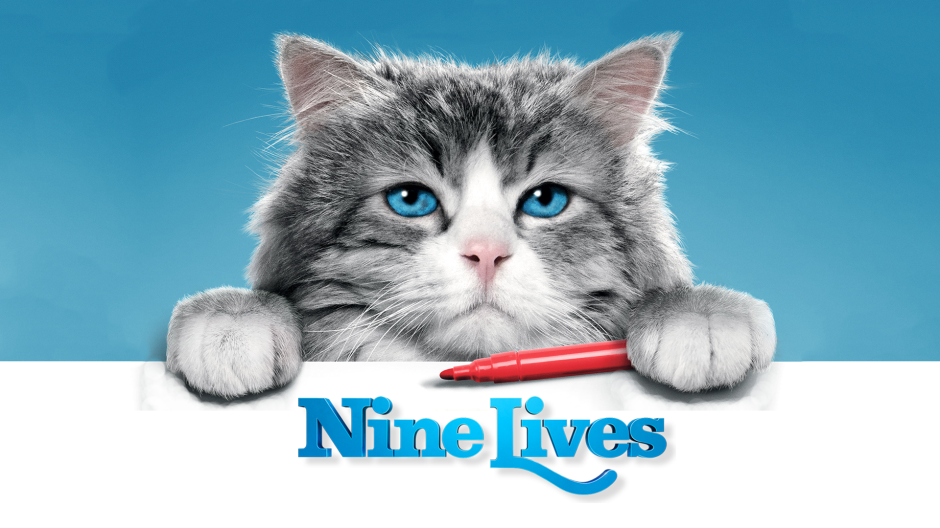 “I went into the movie wanting to have a ‘so-bad-its-good’ time, but I left with a genuine smile on my face.”

So last night I finally got around to watching Nine Lives, and believe me when I say that I honestly was looking forward to seeing this movie since it was in theatres. Movies like Nine Lives seem to only come once in a blue moon, so I feel that they have to be cherished. What’s so special about Nine Lives? How about the fact that Kevin Spacey is playing a cat? Does that tickle your fancy? What about the other famous actors in the movie? Still not sold? Just watch any of the trailers released and you will see exactly why I was looking forward to Nine Lives. Nine Lives follows business man Tom Brand (Kevin Spacey) as he acts like an asshole and puts his family second. This all changes however when he falls from a building with his daughter’s birthday present (a cat) in tow, and promptly switches minds with the cat leaving his original body in a coma. It is now up to Tom Brand (a.k.a. Mister Fuzzypants) to learn his lesson in time to get transported back into his body before it gets removed form life support. Honestly, I couldn’t ask for a worse sounding movie and that is why I was so excited to see it.

Nine Lives starts off exactly like I would expect it to. We see a terribly made CGI city scape, and swiftly zoom in to a small plane flying overhead. In said plane, a man dressed in a base jumping outfit is getting ready to jump; this is Tom Brand. It’s not only the idea of this scene that makes it ridiculous, but it’s the execution. It couldn’t be more obvious that this “plane” is sitting in a soundstage surrounded by green screen, and this goes double for the “rooftop” that Tom lands on when he finally jumps. The character of Tom Brand is so poorly written that he is just a “bad man” stereotype. He ignores people, he doesn’t answer the phone when his wife calls, he constantly threatens to fire people; you know, just the kinds of things that villains in movies do. It comes to light that Tom has forgotten his daughter’s birthday once again, and utilizes his crack-team of idiots to brainstorm a present for her. Finally giving up, Tom decides to get her what she has been asking for all this time: a cat. Tom drives to the nearest pet shop but his GPS malfunctions and leads him to Purrkins Pet Shop, run by Felix Perkins (Christopher Walken). It is here where he is introduced to Mr. Fuzzypants, and he quickly throws him into the passenger seat of his sports car. I know at this point I’m just recapping the movie, but if I didn’t explain it you wouldn’t believe me. Tom goes back to his office for a meeting on the roof (for whatever reason) and gets thrown off by some lighting. He plummets to his certain death, but luckily gets saved at the last minute by a wire or something, and gets thrown back into the building. This is where the fun begins. What follows is a series of scenes that feature Tom trying to tell his family that he is inside the cat. These antics include getting drunk, peeing on the rug, and destroying the apartment. This is exactly what I expected form the movie, so I wasn’t disappointed. Seeing a cat run around and cause mayhem while the voice of Kevin Spacey narrates it all in a hilarious manner is all I could ask for. But then things started to change.

I found myself laughing at the movie, not because the plot was stupid but because the jokes were funny. I found myself feeling really bad for these characters who are trying their best to live their life despite their father/husband being in a coma with very little chance of pulling through. I found myself getting angry whenever the real villain of the movie, Ian Cox (Mark Consuelos), would appear on screen. I found myself liking Nine Lives. I think it was the cat that won me over first. When I first heard about Nine Lives I didn’t know what to expect, but I certainly didn’t expect the majority of the film to use an actual cat. I expected a shitty CGI cat or something, but what I found was a really well trained feline. Sure there were a few CGI cat moments, but even those weren’t bad at all. I found myself amazed at the attention to detail that the effects team gave to this cat that everyone was making fun of before the film was even released. And on top of all of that, the jokes that I was seeing were actually really funny. I was laughing at all of these antics that this cat got up to, and not because they were original, but because they were well done. The next thing I noticed were the performances, and how genuinely good they were. You not only had Kevin Spacey delivering hilarious lines via the cat, but you also had Christopher Walken appear every once in a while and absolutely steal the show. On top of that you have the performances of Jennifer Garner who was able to hold her own during emotional scenes, and Malina Weissman, who played Tom Brand’s daughter very well. Honestly, the level of emotion that was brought to her character was amazing, and I wouldn’t be surprised if she has a serious career ahead of her. Really one of the best performances goes to Mark Consuelos for making me want to punch him in the face whenever he was on screen. I honestly haven’t seen a villain so effortlessly evil in a long time, and both Consuelos’ performance, and the writing of the film killed it. Another thing that was amazing about Nine Lives was just how dark the story got. For a kids movie, you could definitely tell that some care went into the story because the themes and a lot of the jokes were very adult. Couple that with the fact that the film was able to deliver a story with a really heartfelt message, and I was completely sold. Honestly the only issue I had with Nine Lives was the fact that many of the characters were watching the movie on their phone during the movie, but that was weird more than anything. Nine lIves even has a great ending, making sure to not overstay its welcome. It says what it needs to say, and then it leaves.

Overall Nine Lives was a complete surprise to me. I went into the movie wanting to have a ‘so-bad-its-good’ time, but I left with a genuine smile on my face. I don’t know if it was due to my low expectations thanks to everyone shitting on it, but I honestly didn’t find anything wrong with Nine Lives. Sure it’s a little hokey at times, but it is a kids movie after all; and I think it did a good job of entertaining not only kids, but adults as well.

I give Nine Lives an A