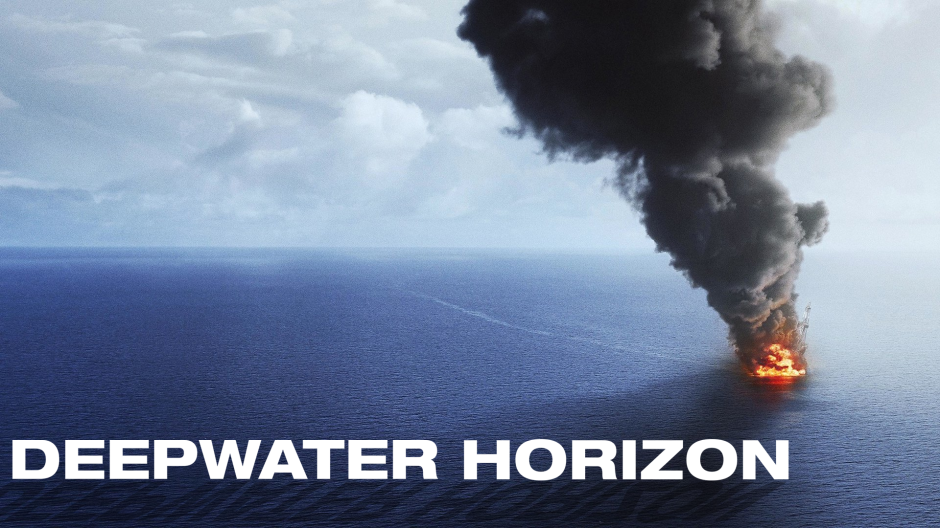 “The sense of chaos and danger that you feel, even though you’re sitting at home in your underwear, is stunning.”

Deepwater Horizon is a film that chronicles the tragedy that occurred on the offshore oil drilling rig of the same name in 2010. Forty three days behind schedule, a few choice BP oil company men decide that it is best to forego many safety tests to insure that the drilling rig is in fact safe. As you may have guessed (or remember), this backfires tremendously and creates what is still the largest oil-based incident in the U.S.. The film follows the crew who were on board the Deepwater Horizon during this disaster but mainly Mike Williams, the rig’s chief electronics technician.

Deepwater Horizon starts off on pretty shaky ground in my opinion. The film takes place off the coast of Louisiana, and therefore everyone we meet has an accent to match. Well, at least they’re trying to have an accent to match. These accents, instead of immersing me in the film, just seem to get in the way. Not only does it make certain characters hard to understand (like John Malkovich’s character), but it acts almost like a punchline for others. Take Mark Wahlberg for example: Mark Wahlberg is by no means a bad actor, but he can’t do accents. He’s from Boston, and that is what he sounds like. That is something that you should have gotten over instead of making him do what I assume was his most honest attempt at a southern accent. Not only could I not hear it for most of the film, but when I could it was absolutely hilarious. The beginning of Deepwater Horizon also has another pretty big issue in my opinion: false starts. Dramatic irony is something that Deepwater Horizon uses to its advantage throughout the entire film. Not only are we privy to the fact that there will be a disaster on board this drilling rig, but the film takes time to show us the problems forming over a short period. This is fine, and I appreciate the transparency because there is no way we don’t know what the movie is about at this point. What pissed me off was the numerous “false starts” that the film seemingly tried to trick us with. The entire beginning of the movie can be summed sup with character going “Hmmm, that’s not right” for about forty minutes. Now I’m not bashing the start of this movie, because I did find it really enjoyable, but I did get a little frustrated that the movie tried to “foreshadow” these events that we already knew were going to happen. It was at this point that I got a little angry because I thought that these jump scares (for lack of a better term) would take away from the impact of the actual event; but boy, was I wrong.

When the shit hits the proverbial fan in Deepwater Horizon, it doesn’t stop for even a second to let you catch your breath. I couldn’t tell you the amount of times that I caught myself clenching my fists or not breathing because I was so fucking transfixed by what I was seeing on screen. Deepwater Horizon is immersive, plain and simple; and to be able to say that about a movie with a scale so large is insane. Everything about Deepwater Horizon works in these moments. The performances are amazing, despite the accents that I mentioned earlier, and they completely suck you into the film. One thing that I really do have to praise are the effects in Deepwater Horizon. Let me tell you, this is one movie that I regret not seeing in theatres. The scale of this disaster is not really something that can be captured on a screen, but this movie came damn close. The sense of chaos and danger that you feel, even though you’re sitting at home in your underwear, is stunning. These effects continuously surprised me throughout the film. I will admit that there were a few instances where some not-so-great CGI was used, but the editing did a good job to cut around it. Of course the film is about an oil rig exploding, but this movie goes so much deeper than that in terms of immersion and effects. The brutality that is shown on screen really makes me question why this movie is PG-13. But much like a good film should, Deepwater Horizon doesn’t shy away from this brutality, instead showing it full-frame. It wants you to feel the pain that these people felt, be scared like these people were. It wants you to be them for two hours; and it accomplishes that goal. I also really liked how the film tried to educate us on the topic of oil-drilling as the movie went on as well. This was accomplished in many different ways (title cards and Fast-and-Furious-style “look inside the machinery” shots), but they all really helped me not only learn about these things but also get in the right mindset. It doesn’t take a genius to realize that an oil rig blowing up is a bad thing, but I liked that Deepwater Horizon took the time to try and explain why exactly it happened. The last thing I want to discuss is something that I noticed at the end of the film. When we finally get to see a picture of the real Mike Williams and his family, something hit me. Now I believe in alternate realities; the ideas that there are multiple versions of me doing slightly (or drastically) different things in infinite numbers. Another thing I believe is that if you showed every single one of them a picture of the real Mike Williams, not one of them would go “Oh yeah, that looks like Mark Wahlberg”. I understand that sometimes it is more important to get star-power behind a movie rather than focusing on likeness-casting, but come one. Not only did Mark Wahlberg look absolutely nothing like Mike Williams, but there were literally other actors in the film who did. The same can be said about Kurt Russell playing Jimmy Harrell, but it was definitely more shocking with the character of Mike Williams. Deepwater Horizon was such a serious, tragic movie and this image of the real Mike Williams at the end almost acted like a punchline for me. I’m not mad seeing as Mark Wahlberg did a great job in the film, but I just can’t help but wonder why literally no one else was chosen for the role.

Overall Deepwater Horizon is a film that will suck you in, and keep you on the edge of your seat for its two-hour runtime. It not only offers wonderful performances, but also breathtaking effects as well. The beginning is a little hokey at times with the funny accents and hamfisted foreshadowing, but even that managed to engross me and leave me hanging on every word.

I give Deepwater Horizon an A