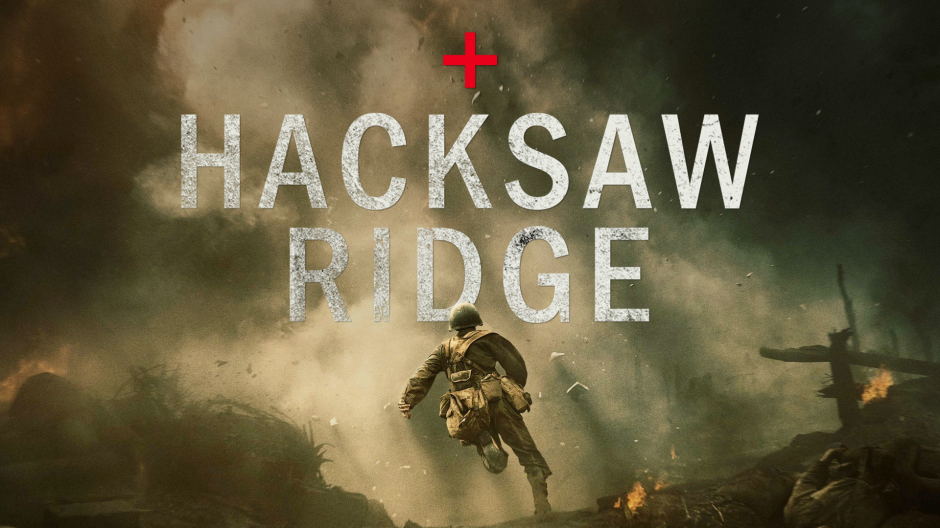 “… takes a beautiful story, throws in some amazing performances, and tops it off with brilliant direction and effects to deliver one of the better war movies I have seen.”

Yesterday I finally got around to watching Hacksaw Ridge, and coming off of Dunkirk it was nice to have a war film that actually resonated with me. Hacksaw Ridge is a film about Desmond Doss, an American soldier who fought during the second world war despite being a conscientious objector. Never using a gun, Doss saved the lives of 75 men during the battle of Hacksaw Ridge and this movie chronicles that staggering act of bravery.

The film follows Desmond Doss (played by Andrew Garfield) throughout his whole life, so the beginning is not really about the battle but more about the man. I appreciated this decision because it allowed us as an audience to grow attached to the character of Desmond Doss, but I would be lying if I didn’t say that the beginning of the film was pretty hokey at times. There was a lot of “I’m just a small town boy who loves Jesus” and “I’m gonna marry this girl, but first we’re going to go out on a cute date at the malt shop”, and don’t get me wrong I didn’t hate this destuff but it was right on the edge of being too much. Luckily for every scene that made me borderline sick to my stomach, there was a scene that actually made me sick to stomach (usually involving Desmond’s dad). Hugo Weaving makes the beginning of this film something to remember with his portrayal of Tom Doss, Desmond’s father. Tom Doss is a very interesting character, and is kind of the catalyst for Desmond’s outlook on life. Where Tom is a hateful man, Desmond decides that he will spend his time helping people. We learn that Tom is like this because of the war, and that is where the character of Tom Doss really comes into his own. Instead of the stereotypical “angry dad”, we now get a very complex character who does shitty things because of what he’s had to go through in his past. I’m in no way defending this character, but it does take the situation from black and white to one that is a little harder to judge. All of this is made possible by Hugo Weaving’s fucking phenomenal performance as Tom Doss, and like I said he is the reason the beginning of the movie is as good as it is.

But the real movie picks up when Desmond decides to enlist in the army, the beginning of this journey taking him to a training camp. During his short time at this camp we get to meet all of the characters that will be fighting alongside Desmond in his battles to come. This group of men is nothing special to look at at first, most of them comprised of general stereotypes that are used to fill out a roster, but their time comes later. No, the main thing that I have to walkabout here is the character of Sergeant Howell, played by none other than Vince Vaughn. Have you seen Full Metal Jacket? Remember how the drill sergeant in that movie yelled at people a lot and made jokes? Well Vince Vaughn certainly remembered, and that is exactly what he tried to emulate in this movie. Unfortunately it didn’t work. I grew up watching Vince Vaughn in such movies as Dodgeball and The Wedding Crashers so to me he is a comedic actor. I couldn’t even completely buy him in season 2 of True Detective, but that may be in part due to the writing in that series. My point is, I didn’t buy Vince Vaughn as the “angry drill Sergeant” at all. His lines were good, but the delivery is not something that worked for me. This could be a miscast, or it could just be because of my skewed perception of his character. Luckily this is where the story of the film picks up. We get these really interesting conflicts where Desmond is chastised (and worse) for his beliefs and decision to not use a weapon, and this is where we get the best look at his character. These scenes really start to bring the drama that Hacksaw Ridge has to offer, but they are nothing compared to what is to come.

The movie truly comes into its own when we get to the warfront; the titular Hacksaw Ridge. This sequence starts off by having trucks carrying dead bodies drive by these characters that we’ve just gotten to know, and that is all they need to see to have the gravity of their situation sink in. The highlight of this movie for me was when the men first set foot on Hacksaw Ridge, and the battle that commences. I’ve never been in war, but from everything I’ve heard I know that it is hell. This movie captured that feeling perfectly with the chaos and confusion, as well as the horrors present on the battle field. I don’t think anything will top the beach scene in Saving Private Ryan in terms of realism, but Hacksaw Ridge definitely gave it a run for its money. Everything in this sequence is top notch; you have brilliant direction that really makes you feel like you’re a part of the action, all of those men who I mentioned before do a great job at playing characters who are just terrified and shellshocked, and the effects are great as well. Well, most of the effects are great. Hacksaw Ridge unfortunately opted for digital blood which is not something that I buy most of the time (especially when it “gets on the lens”), but other than that the effects were top-notch. And I already mentioned all of the side characters having great performances, but this section is really where everyone gets to shine; especially Andrew Garfield. I didn’t think much about Andrew Garfield before I saw Hacksaw Ridge, but let me tell you I was mistaken to have overlooked him for so long. The amount of emotion that Garfield was able to convey just in his facial expressions alone was enough to make me believe that he was actually in that situation. I was completely immersed when watching Garfield do his thing, but honestly it was everything else surrounding his performance (including his performance itself) that made this movie so great for me.

I could talk about how great this movie for hours, but it is one that you just have to watch. Hacksaw Ridge takes a beautiful story, throws in some amazing performances, and tops it off with brilliant direction and effects to deliver one of the better war movies I have seen. There are a few slip ups with casting and effects, but overall this movie is almost flawless.

I give Hacksaw Ridge an A