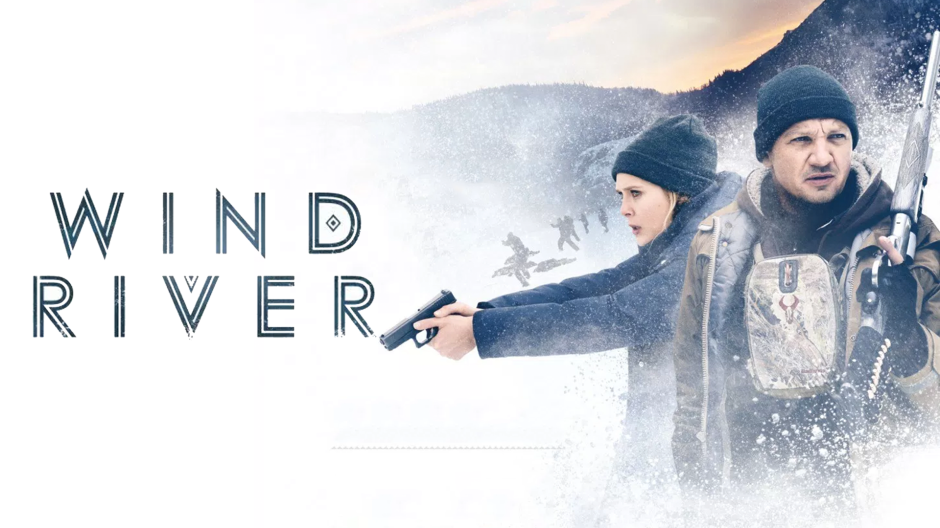 “… a great directorial debut by Taylor Sheridan, and what I would call his strongest script yet.”

Wind River is a film that is written and directed by Taylor Sheridan (the man behind both Sicario and Hell or High Water), and though I recognize Sheridan is talented his other movies didn’t quite do it for me. They were good, but not great; so suffice it to say that I was excited for Wind River, but cautiously. When a hunter stumbles across the frozen dead body of a teenage girl in the Wind River indian Reservation in Wyoming, he is tasked with helping an FBI agent, who is firmly out of her depth, solve this heinous crime.

Wind River starts off as a rather slow burn, but it is in no way boring. The beginning of Wind River, much like the beginning of every movie, is there to set up the story. We get glimpses of the life of our main character Cory, a hunter who is payed to track and kill wildlife that threatens the livestock of many farmers. We get a feel for this character and his struggles, but we don’t get fed information. It’s kind of like a puzzle that has to be put together, and that makes the experience a bit more rewarding if you ask me. More importantly than getting a feel for the characters, we get a feel for the location. The Wind River Indian Reservation provides a very harsh and bleak setting for a very harsh and bleak movie. I personally love barren settings for movies like Wind River because it makes everything done seem all the more futile; but maybe that’s just the pessimist in me talking. Unlike the story being told, the setting of the movie doubles as being very scenic and beautiful. This creates an interesting contrast with the horrible stuff that is going on in this location. Other than that Wind River is a rather classic ‘fish out of water’ story, but with a darker twist. Elizabeth Olsen plays Jane Banner, an FBI agent who really doesn’t understand that subtleties of dealing with crimes on an Indian Reservation (this is a point I will touch on later). This creates a sort of disconnect between her and the crime she is trying to solve, and it also allows for the audience to be taught things as she is being taught them. The film then manages to pick up and become a brilliant display of writing and filmmaking that essentially defines the word “intensity” and then ends in such a beautiful way that I will think about it for years to come, but I don’t want to spoil any of that. This early part of the film is carried by the performances, and let me tell you: they are incredible. Much like the setting the characters are kind of bleak and refined, but every once in a while you get a moment where their raw talent shines through. I’m not going to spoil any of these moments, but just know that they are there. Jeremy Renner does an amazing job as Cory Lambert, the hunter in the film. The way that Renner is able to make his character’s pain come to life just under the surface of his calm, cool, and collected demeanour is wonderful. Of course this pain escapes every once in a while (as I’ve already said) and what we get is nothing short of magnificent. Elizabeth Olsen does a great job as the FBI agent Jane Banner, and what I liked about her character is that she was never the butt of the joke. There was never a moment where she says something out of touch (unbeknownst to her), and all of the locals share a look that says they would be laughing their assess off if they were any less polite. Sure she is out of her element, but she is not incompetent. Once again Olsen gets a few moments to personify the pain that a lot of the other characters in the film have been feeling all of their lives, but they’ve learned to deal with it (again, I’lll talk about this later). Wind River also features a great performance form Jon Bernthal that, while short, manages to showcase his wonderful acting skills. And finally I want to kind of congratulate Wind River for casting as many Native actors as they could, which not only helped give the movie some realism, but also helped with the next point I’m going to talk about.

Wind River is a film about trying to solve a crime, but it’s more about the futility that Natives face when trying to get help for anything really. I don’t claim to be an expert on the subject, but I have done research on the First Nations people of Canada, and I know that the struggles are very similar between them and Native Americans. Wind River doesn’t just provide us with an entertaining story, but an important story. The film deals with many of the struggles that Natives have to deal with every day, and thrusts them into the much needed spotlight. These problems range from the larger picture (nobody giving a shit when Natives go missing or get killed), to the smaller picture (drug use and loss of culture). The way that these problems were dealt with in the film is so caring and has this feeling of importance. These issues didn’t take center stage, but they were there nonetheless; lurking just behind the cover that many of these characters put up. I’m not going to say that this is the best representation of Native struggles in film, but it is a much needed one. This oppression and silent struggle has been going on for years upon years, essentially since colonization began, and it has always been swept under the rug. I don’t expect Wind River to bring all of these issues to light; Hell, I don’t even expect many viewers to pick up on the issues that the film is touching on. That’s what I like about it, it was done with subtlety that plants the idea in t he back of your head instead of slapping you in the face with it. Even small things like one of the Native character saying in reference to his ‘death mask’ that nobody was alive to teach him, so he had to make it up himself. This seemingly throwaway line deals with a much bigger issue, and though many people may not pick up on it at first I’m glad that an attempt was made.

Overall Wind River is a great directorial debut by Taylor Sheridan, and what I would call his strongest script yet. Wind River features an amazing story that starts off slow, but culminates into a wonderfully intense and rather touching ending. The film manages to also touch on a lot of issues that Native Americans face, but does so in a way that is subtle and effective. The film also features wonderful performances, and an amazing setting that captures how bleak the story is.

I give Wind River an A