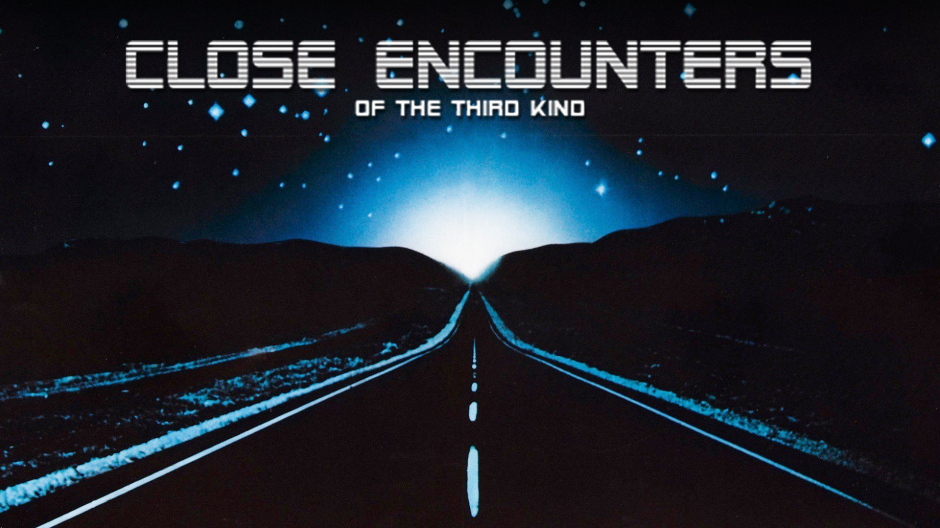 “… manages to be an intense, awe-inspiring experience even 40 years after its release.”

So yesterday I finally got to see Close Encounters of the Third Kind, and I say “finally” because despite remembering watching a few key scenes on cable when I was a child, I definitely didn’t remember most of the movie (especially the ending); so I’m counting this as a first for me. And I was lucky enough to experience this amazing movie on the big screen, which was worth every penny. For those who don’t know Close Encounters of the Third Kind is a movie that follows the appearance of alien life on earth from three perspectives; the government, a family man, and a single mother whose son is seemingly obsessed with these floating lights. The stories eventually converge and what we get at the end of this film is not something that I can really put into words.

Let’s just jump right into this I guess, and start with the sound design in the film. Close Encounters of the Third Kind is a unique movie because of how it sounds. Usually movies focus the sound on the subject of the scene, even going so far as to have extras in every scene be completely silent only pretending that they are having conversations, but Close Encounters does the opposite. Instead of isolating the important sounds, Spielberg treats every single sound as though it is of the same importance. This creates a very realistic, almost to an annoying extent, atmosphere that involves a collage of noise that beats you over the ears in every scene. This is impressive for two reasons: 1. It mimics real life. No matter how much we want to rebut that fact, life is noisy. Humans learn to focus on one thing at a time which is how we don’t go insane, and that is a skill that has to be put to use when watching Close Encounters of the Third Kind. 2. This technique raises the tension in the film dramatically. Instead of relying on the dialogue itself (which is intense, might I add), Spielberg instead lets the atmosphere do the work for him. You feel frustrated when you know that important information is being said and you can’t quite hear it over the jackass in the foreground talking to his buddy about God knows what. You grow irritated and fatigued, and just like that you now feel like the characters in the film. The sound design in Close Encounters has a way of immersing you in the film in a way that is very rare to see (or rather, hear). To add onto the sound design I want to briefly touch on the score of the film. Close Encounters is a film scored by John Williams, and although it isn’t as iconic as Star Wars, it is a film that shows John Williams is a really talented guy. The Close Encounters score is something that is full of whimsy and wonder, much like the scores of Danny Elfman that will appear in every single Tim Burton film in the years to come, but at the same time they add to the immersion that I mentioned earlier. What I like about Close Encounters is that as a movie it isn’t meant to be scary, there is always the threat of the unknown but the characters in the film aren’t afraid of it; and the score of the film reflects this. I also really love how the score of the film utilized the five tones that play a huge part in the film. And speaking of the five tones, I loved the sound that the spaceships made as well. Not only was it really creative to have them make musical sounds, but toward the end of the film the ‘conversation’ that takes place is both beautiful and gripping. You want to know what was being said, but at the same time you’re so transfixed with how beautiful it sounds that you don’t care.

As I’ve already touched on, I really liked the story in Close Encounters as well. Not only did I like how the story was presented in three ‘strands’ that merged eventually, but I also really liked the mix of comedy and drama in the film. Close Encounters had me laughing my ass off multiple times throughout the film, and the funniest part was I don’t even know if it was intentional. I mean, of course it was intentional, but I don’t think Spielberg wanted to make a comedy; it’s more like he just filmed some real life shit, and sometimes real life is funny. This made everything feel even more genuine and made the laughs even heartier. Something else that was done wonderfully in Close Encounters was the descent into madness of Richard Dreyfuss’ character, Roy. In the film Roy is exposed to the alien spacecrafts and then afterwards starts to get these visions of a mountain or structure or something. These visions drive him borderline insane and seeing that spiral was phenomenal. It wasn’t written to an extent that was unbelievable either, and that’s what makes it so amazing. The spiral was slow but definitive, and that made the entire thing all the more tragic. Of course a lot of this comes from Dreyfuss’ amazing performance, because he really nailed the subtleties of this descent. He played Roy as a man who was franticly trying to replicate this shape, but at the same time terrified. You can see the despair in his eyes when his wife confronts him on a few occasions; he’s sick, he knows he’s sick, but there is nothing he can do about it. This, despite being tragic and terrifying, was an absolute treat to watch and honestly made the movie for me. The rest of the performances are great as well, but nothing holds a candle to Dreyfuss.

Something else I really liked about Close Encounters was the design of the spaceships. In the early parts of the film these crafts are nothing more than floating balls of light. This is brilliant for a few reasons; it keeps the suspense high and the questions coming, and it is a good way to cover special effects costs. This was simple yet effective, and it goes to show why Spielberg was at the top of his game around this time. But by the end of the film, when the questions are fading, Spielberg decides to show us more of these spaceships; and what we get to see is beautiful. I’ve always been obsessed with special effects in movies, especially during the Star Wars era where everything had to be “tricking” the audience because the technology just wasn’t there yet, and Close Encounters shows that perfectly. The large spaceship in the film is obviously a miniature, but with how detailed and amazing it looks it doesn’t matter; as a matter of fact, it makes it all the more impressive. To see the care and craftsmanship that went into building this wonderful piece of art, it is astounding to me. This is the major payoff in my eyes, and it works wonderfully. But then something else happens. The movie doesn’t end there, but it instead gets really fucking weird. I’m not going to worry about spoilers because this movie is old as shit, so if you haven’t seen it, there was your warning. I’m going to come right out and say it: I did not understand the ending of Close Encounters. So I guess aliens were abducting people, but then they just let them go? And then there was a weird spider alien who just kind of disappears form one shot to the next. And then there are a bunch of children dressed up as aliens, and then there is a different alien who is animatronic. Was this supposed t be the same alien? And then Roy puts on a space suit and goes with the aliens? What about his family? What about earth? Why is he not afraid that they will kill him? All of this brings up too many questions right before the credits, and leaves you completely puzzled. I feel like Close Encounters would have been a better movie (though it is already damn-near perfect) if the ending was chopped off before the alien reveal. In my opinion some things are better left to the imagination.

Overall Close Encounters of the Third Kind manages to be an intense, awe-inspiring experience even 40 years after its release. Everything about it from the sound design, the score, the performances, the special effects, is done with such care and expertise that it is hard to not feel such excitement while watching it. I wasn’t the biggest fan of the ending, but it wasn’t bad enough to spoil the rest of this amazing film.

I give Close Encounters of the Third Kind an A