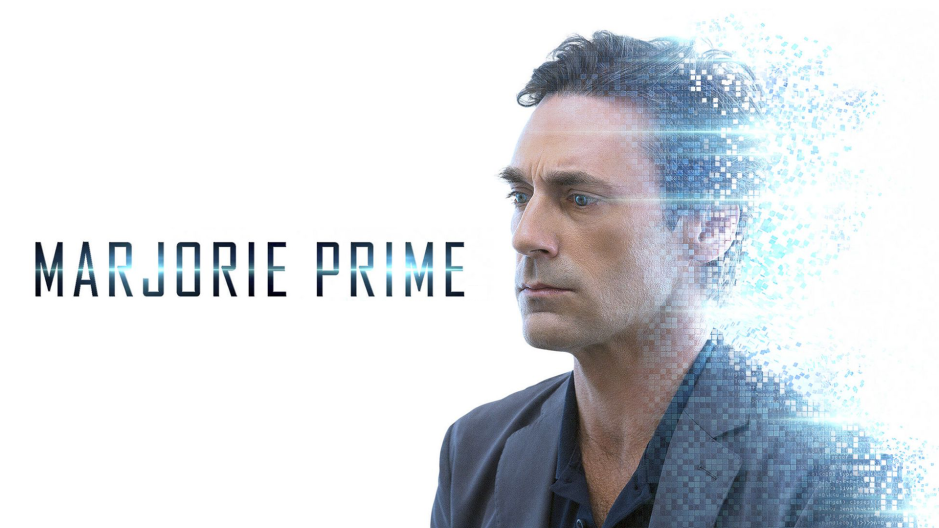 “… like if you took an episode of Black Mirror and combined it with talk radio: It will bore the shit out of you, but with sci-fi!”

Yesterday, while walking around the mall with a friend, I decided to go into a local movie/music store when something caught my eye. Scattered amongst all of the Blu-rays that I had seen a thousand times before was something different: A pristine white slipcover adorning Jon Hamm’s face dissolving into polygons. Intrigued, I picked up the movie and read the title: Marjorie Prime. But what intrigued me even more than the title was the cast list. Jon Hamm, Tim Robbins, Geena Davis; how had I never heard of this movie before?! I quickly looked it up on Google (just to make sure it was generally well-received), and walked over to the counter with the spoils of my hunting. When I got home I put the Blu-ray in to my Xbox, laid back on my bed, and was treated to what is easily the worst purchase of my entire Blu-ray collection.

To try and summarize this movie would be about as messy as the story in the film itself so I’ll pitch to you exactly what this movie was pitched as (I’m sure). Marjorie is an old woman with a disease that is deteriorating her mind. She spends most of her days confused, not knowing who she is or where she is. The only thing keeping her company is an A.I. hologram of her long-deceased husband. This is all the movie is: an idea. This idea, those few sentences, were stretched into 90 minutes. This elevator pitch got fucking green-lit, and the writer immediately went “Well was else should the story have?”. The answer they settled on? “Absolutely nothing”.

What gets me so fucking mad about Marjorie Prime is that it isn’t a movie. Not in the slightest. First of all, movies should have three acts, and character development, or at least something happening. Marjorie Prime had none of this. The movie presents these ideas about death and aging and grief, but it does so in a way that makes you roll your eyes at the effort. It just places these ideas on the table and adds nothing to them. Yes, we know that people get sad when the ones they love die, thanks for the refresher.

And what rubs salt in these wounds is that the performances in Marjorie Prime were phenomenal. They were poignant, they really delved into deep character emotions, and they were realistic. The problem here is that there was nothing to perform. Marjorie Prime is like if you took an episode of Black Mirror and combined it with talk radio: It will bore the shit out of you, but with sci-fi!

The only intriguing part of this movie was the beginning, the idea that I conveyed to you at the top of this piece. What happens after this “conclusion” (if you can even call it that) is a mess of confusion and fake depth that the filmmaker obviously patted himself on the back for.

I can’t really say much else about Marjorie Prime becasue it gave me nothing to work with. The only thing Marjorie Prime made me feel when watching it was longing. A longing to be dead and become a weird grief hologram so I wouldn’t have to watch the rest of the movie.

I give Marjorie Prime an F