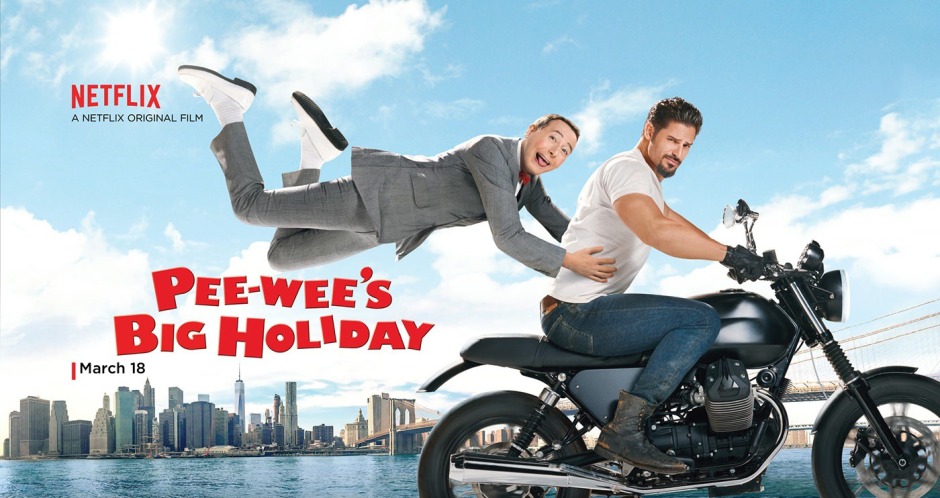 Yesterday I watched the newly released, Netflix exclusive, Pee-wee’s Big Holiday. Now Pee-wee Herman was a large part of my childhood from watching episodes of Pee-wee’s Playhouse, to being terrified of Large Marge (you know what I’m talking about) so having a new Pee-wee adventure makes me happy. This time around, Pee-wee Herman is visited by actor Joe Manganiello who convinces Pee-wee to take a road trip by inviting him to a party in New York. Now, I don’t think it has been established exactly where Pee-wee’s town of Fairville is located, but I assume it is somewhere on the West coast, meaning that he has to travel cross-country. Like other Pee-wee Herman movies (specifically Pee-wee’s Big Adventure), Pee-wee’s Big Holiday is not so much about the trip as it is seeing Pee-wee interact with crazy characters along the way.

I’m going to cut right to the chase and say that I liked this movie. I don’t think it holds a candle to Pee-wee’s Big Adventure, but it was by no means a bad movie. That’s not to say that it didn’t have its problems though. The main issue I had with this movie was the pacing. I had been watching the movie for what seemed to be at least an hour last night, but imagine my surprise when I checked the time and realized the movie had only been on for 30 minutes. I feel that the pacing issues come from how disjointed the movie feels. Like I mentioned before, the movie is about Pee-wee interacting with strange characters during his trip, but what bothered me is the movie seemed like small vignettes that had no connection to one another instead of feeling like a complete narrative. I guess Pee-wee’s big adventure fell victim to that as well, but for some reason it seemed more prevalent in Pee-wee’s Big Holiday. This lead to the pacing being all screwy because halfway through the movie you have already witnessed about 5 story arcs, and then you start to fear that there is no end to the movie because you have no guideline (story-wise). The movie also featured a completely out of place song and dance number toward the end of the film (when Pee-wee reaches New York) which really adds to my feeling of the movie being scatterbrained. Another problem I had with the movie, and this may sound weird, is that the characters were too bizarre. I know, I know, Pee-wee Herman is one of the weirder characters to ever grace the big screen, so how can characters get more bizarre than that? Well, in Pee-wee’s Big Adventure we got to see Pee-wee Herman, a man who is equally fascinating and hilarious to watch, interact with people that we may interact with every single day. The comedy then came from seeing how Pee-wee would get under their skin, or really connect with them on a personal level. In this movie we lose that because all of the characters are equally as (or even more) insane than Pee-wee himself. This makes the movie feel almost more akin to a freak show than a comedy. I’m not saying that Pee-wee’s Big Adventure didn’t have weird characters, I’m saying that it had characters that were more grounded in reality than those in Pee-wee’s Big Holiday. That being said, I loved that Joe Manganiello played himself in the movie because that led to some pretty hilarious dialogue in the film.

One thing, the thing, Pee-wee’s Big Holiday has going for it is the comedy, and that’s all it needs. This movie has jokes so clean you wouldn’t hesitate to watch it in a room full of your family at christmas time, and everybody would laugh. That’s why I love the character of Pee-wee Herman, it seems almost effortless for Paul Reubens to write this stuff, and it is timeless. I don’t even think there was one innuendo in this movie, which is saying a lot for a comedy. Hell, even kids movies today are filled with innuendos to get parents to enjoy the film too, but Pee-wee doesn’t have to do that. Another thing that puts this movie streets ahead of other comedies, is it doesn’t rely on pop-culture references. Let’s face it, it has become a staple in comedies to reference current events, but the sad fact is that even though those movies are funny now in ten years you’ll be scratching your head at why you laughed so hard at it. I really have to hand it to everyone involved in this film, it is one of the most refreshing films I have seen in a long time, and an absolutely fitting Pee-wee Herman movie.

Overall I think that Pee-wee’s Big Holiday, while not being better than other films in it’s franchise, is good clean fun and that’s a breath of fresh air for movies of today.

I give Pee-wee’s Big Holiday a C