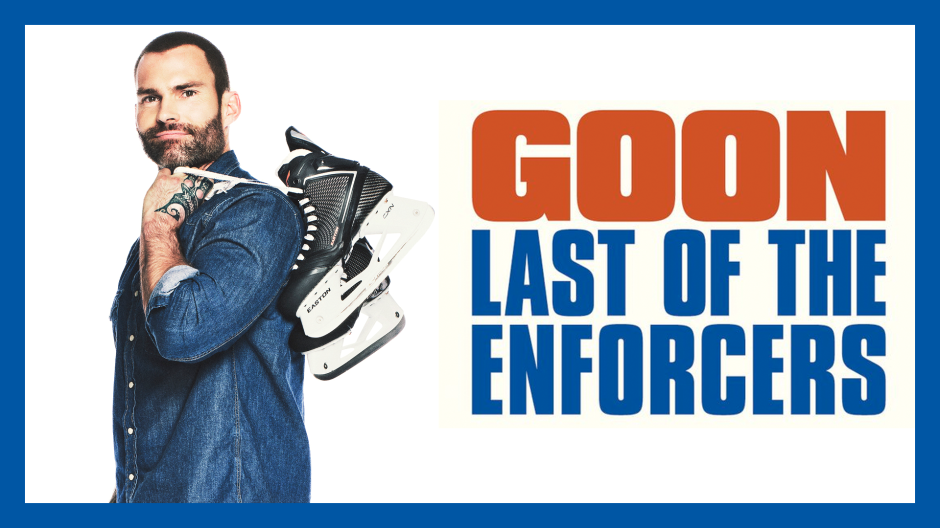 “… a sad attempt to re-capture lightning in a bottle.”

Reading through this review I realized that I spoiled some very minor elements of the film, so just keep that in mind if you are about to read what I’ve written. If you’re wondering if you should see Goon: Last of the Enforcers, I would recommend you wait until it hits Netflix.

Yesterday I went to see Goon: Last of the Enforcers and honestly it was a pretty sad experience. Not sad as in the movie was sad, more like watching a really old animal try to climb some steps sad. Goon: Last of the Enforcers catches up with the Halifax Highlanders right as a NHL lockout is occurring; this means that all eyes (well at least Canadian eyes) are on this minor league hockey team that we know and love. To explain the entire plot of Goon: Last of the Enforcers would take a substantial amount of time, so I’ll give you the highlights. Doug “The Thug” Glatt is back and better than ever, well despite the fact that he hurt his arm really badly and is forced to retire. But don’t fret, because he then decides to leave retirement and play some more hockey. I apologize for not being able to go into more detail, but as I will explain this movie is a fucking mess in terms of story.

Goon: Last of the Enforcers (which I will now just call Goon 2) picks up a few years after the original film. How many years? Fuck if I know. I assume that since the original Goon took place around the films release, this one does the same; but to be honest I have no fucking clue. Everything is going well for the Highlanders, well despite the fact that about half of their team is missing. Where are they? Again, fuck if I know. We see a few of them here and there: former team captain is now assistant (?) coach, the medically-focused player is now the team doctor; shit like that. Apart from that nothing else has changed, well except for Doug’s wife being pregnant and Ross “The Boss” Rhea being retired and participating in underground ice-fighting competitions (they’re like hockey, but without all of the hockey). As you can see there was a lot to catch up on, but Goon 2 doesn’t really explain any of this to you. There is no “Hey, ever since I became the (assistant coach, team doctor, retired, etc.), things have changed” or any line of the sort. I’m not asking to have my hand held, but Goon 2 seems like only half of a story is being told. Anyway Doug has a new enemy in the form of Anders Cain,  character who much like Doug himself is an up-and-comer who kicks the shit out of everybody. I thought this was setting up an opposite story to the first film; this time we will see the grizzled veteran being pushed out by the newbie. Unfortunately this wasn’t the case and what we got was a huge mess. The story in Goon 2 is all over the place to put it lightly. Nothing in Goon 2 felt natural, every event felt like it was happening just so there would be something for the audience to watch. This is only increased by the end of the film when the ‘set-up’ for the ending consists of about three stories being told simultaneously. Because of this really weird pacing, the movie became boring. Instead of wanting to keep up with all of these confusing plot lines, I found myself zoning out and thinking of less confusing things. Everything in Goon 2 is just a set-up for the next thing; there isn’t an opportunity to hang out and let the movie go wherever it goes. It honestly felt like a trilogy was planned, but then the last two movies were shoved into one.

Let’s remove for a minute the fact that players on the Highlanders were being traded like baseball cards on a playground; let’s forget that the story was so jumbled it was like it was being told to me by a four year-old. Even past all of that Goon 2 was a very weak film. Where the first Goon had comedy, Goon 2 opted for “comedy”. This consisted of grossly exaggerating the characters that had already been established in the first film, and making jokes that were pretty much call-backs to funnier jokes form the first movie. Honestly it was fucking sad to watch. It’s like the guy who was a quarterback in high school, but now he works at a car dealership. He tries so hard to re-capture the feelings that everyone had toward him in the past that you can’t help but feel bad for him. I know this is going to sound bizarre, but Goon 2 just didn’t have any heart. The first film was just as touching as it was funny. You felt for these deeply flawed characters, you were able to relate to them when they fucked up; Goon 2 offers none of that. The fights in Goon 2 are like superheroes going at it, one punch and the guy is down. There is no feeling for any of these characters. Even the new characters are a mess. You have Anders Cain who is your stereotypical bad boy, and he only gets character development at the very end of the film. You have T.J. Miller who was a completely pointless character, and who was seemingly dubbed-over half the time. And honestly I can’t even begin to name the others because they left absolutely no impact on me. The only saving grace in Goon 2 was the film’s end. In its final ten minutes, Goon 2 managed to capture exactly what the first movie had. There was heart, there was intensity, there was a feeling for these characters. The ending of Goon 2 shows that something could have been done to save the rest of the movie, but it also makes me wonder what the fuck went wrong.

Goon: Last of the Enforcers is a disappointment to say the least. Following what I would call one of the greatest sports movies of all time, Goon: Last of the Enforcers manages to completely miss the mark of its predecessor. This really sucks because I know, deep down, that the movie could have been good. Unfortunately what we got was a sad attempt to re-capture lightning in a bottle.

I give Goon: Last of the Enforcers a C