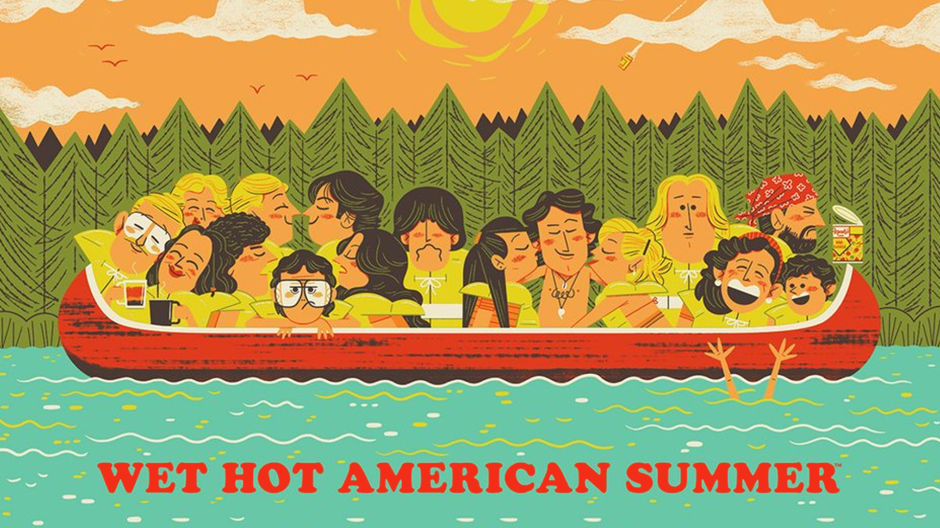 “Wet Hot American Summer leans very heavily on the outlandish, and that’s what makes it so special.”

I first watched Wet Hot American Summer two years ago and I remember absolutely hating it. I had heard so many people praise the movie and attribute it to how their style of comedy had evolved, but when I watched it all I found were these really juvenile and grating “jokes” that acted more as fuel for me to shake my head in disgust than laugh. Funny enough, I went on to watch the Netflix show Wet Hot American Summer: First Day of Camp and I loved it. I thought it was hilarious, and I wondered how it could be so much better than the original movie. Fast forward to yesterday I decided to give Wet Hot American Summer another chance, and boy was I mistaken when I thought that I would still hate it. For those who don’t know, Wet Hot American Summer is a movie that follows campers and camp counsellors of Camp Firewood on the last day of summer camp. The film is essentially a parody of the summer camp culture, with characters taking roles as exaggerated stereotypes.

Maybe my taste in comedy has evolved (or devolved, depending on who you ask), or maybe it was just because I knew what I was getting myself into this time around; whatever it was, I absolutely loved Wet Hot American Summer. Everything about this movie is fucking hilarious, and I can’t believe that there was a point where I didn’t like it. What I love so much about the comedy in Wet Hot American Summer is that the movie is so (intentionally) bad, it ends up being a comedic masterpiece. Even small things like the movie using the same “pottery shattering” sound effect whenever anyone in the movie throws something makes the entire experience all the more hilarious. It’s not that you don’t expect that these jokes are coming, it’s that they’re so stupid that they catch you off guard. The same can be said for literally all of the characters and scenarios in the movie. Wet Hot American Summer leans very heavily on the outlandish, and that’s what makes it so special. It’s not that the characters in the movie are stupid, it’s just that everything we see is so bizarre. Caring too much about talent shows, being so “cool” that you barely take part in anything, going to the library to read up on astrophysics and camp directing, all of these scenarios are just so fucking weird but every single one of them cracks me up.

Really the highlight of Wet Hot American Summer is the cast, who managed to bring all of these insane plot lines to life. Of course you have a lot of the embers of The State, including Michael Showalter, Michael Ian Black, Ken Marino, Joe Lo Truglio, and director David Wain. These guys definitely bring their own flavour to Wet Hot American Summer, and judging by their other works they are the driving force behind most of the jokes. Of course they are all great in their roles as well, each one seizing every opportunity for a stupid joke. But despite these heavy hitters you also have a lot of familiar faces, who may not have been so familiar at the time. You have David Hyde Pierce, Molly Shannon, Janeane Garofalo, Amy Poehler, and Bradley Cooper just to name a few. All of these actors do an amazing job in the film, and for me to praise very one of them individually (even though they deserve it) would take too long. The stars of the film in my opinion are definitely Christopher Meloni and Paul Rudd. These two guys deliver what may be some of the funniest performances I have ever seen in my life. Christopher Meloni plays Gene, the camp cook who lived through ‘Nam and won’t let anyone forget it. The way Meloni plays Gene as the tough guy who is also just really fucking strange is brilliant. You can’t help but laugh at the character of Gene, but then instantly you become terrified of what he would do to you if he knew you were laughing. And Paul Rudd’s character, Andy, is equally the most infuriating and funniest part of this movie. As Andy, Paul Rudd exhibits the perfect “too cool for school” attitude and delivers amazing performances such as him clueing up after himself. We get to see the arrogance that a person like Andy would have changing girlfriends constantly, but we also see that he’s not too cool to care about consequence, taking the time to get rid of any camper that sees him do something wrong. I also want to quickly applaud the feel of the movie, a large part of which comes from the brilliant soundtrack. Wet Hot American Summer takes place in the 80’s, so it was great to hear a bunch of classic 80’s music throughout the film. I also really liked that it was decided to use instrumental versions of the songs instead of the entire things, because they acted more as a soundtrack rather than taking you out of the film.

Overall Wet Hot American Summer is a movie that apparently had to grow on me. Despite not liking it two years ago, yesterday I discovered that I absolutely love it. All of the jokes that I thought were childish were hilarious, all of the scenarios that I thought were stupid enthralled me, all of the characters that I couldn’t stand I fell in love with. Sure there were still a few jokes here and there that fell flat, but ultimately Wet Hot American Summer made sure that it would live in my heart (and vocabulary) for years to come.

I give Wet Hot American Summer an A