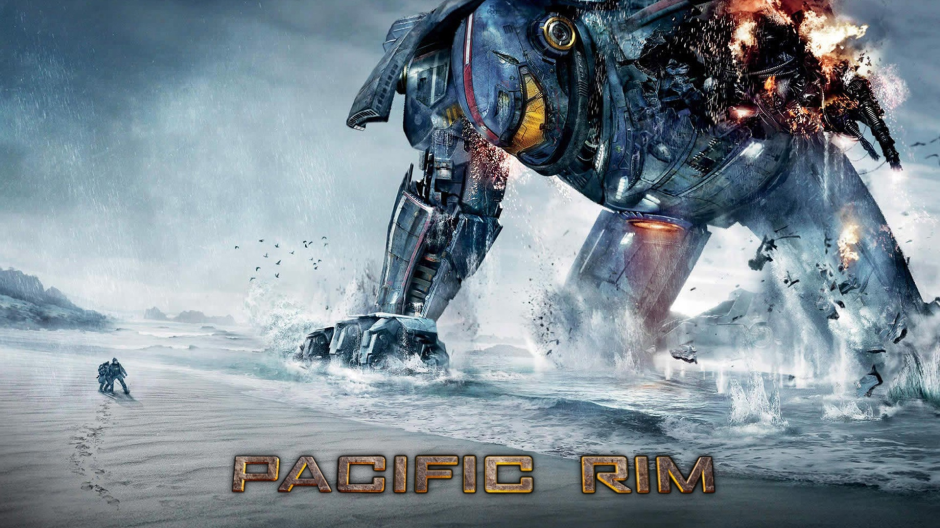 “Pacific Rim is a movie about giant robots fighting giant monsters; nothing more.”

Pacific Rim is a movie that I have heard a lot about since its release, but for some reason or another I hadn’t gotten around to watching it until last night. Let’s just say that the movie didn’t live up to all of things that I had heard about it. Pacific Rim is a film that follows the catastrophic events of a portal opening up in the ocean which allows various Kaiju (giant monsters) to come to earth and destroy shit. This film picks up in the future at the tail end of the Pacific Rim program (the program which makes giant robots to fight the giant monsters), and the ramifications of ending such a plan in favour of something more passive. It’s really hard for me to put the plot of this film into words because there isn’t a whole lot going on. All you really need to know is that there are giant monsters fighting giant robots.

I finally watched Pacific Rim because I have been going through Guillermo del Toro’s filmography, so I think it is only fair to discuss my thoughts on Pacific Rim as a Guillermo del Toro film first. In my opinion Pacific Rim is the least ‘Guillermo del Toro’ film that I have ever seen. There are many points adding to this opinion, but the main one is that Pacific Rim feels very ‘western’. Guillermo del Toro is a filmmaker from Mexico who is known for such films as The Devil’s Backbone, Cronos, and Pan’s Labyrinth. These films (especially Pan’s Labyrinth) are essentially the tentpoles of his career, and they all have the same kind of tone to them. They are all have a smaller scale, and they each try to present a story that is unique but in such a way that you care more for the characters than the events themselves. There is also a theme of having great effects that bring incredibly unique creature designs to life right in front of our eyes. Now del Toro did kind of break this mold with the Hellboy films, but in my opinion it still kept what made his original films so great. Hellboy (both the first and the second) presents this insane world, but does so in a way that is very personal to the characters. It takes the time to build these connections and scenarios so that by the time you have to care about the characters you can do so with ease. Pacific Rim loses that thread for me. Instead of presenting a unique situation in a way that allowed you to grow connected to the characters, Pacific Rim presented a really cool situation in a very generic “action movie” kind of way. Now don’t get me wrong I love action movies, but to see someone like Guillermo del Toro, a very personal filmmaker, create something as generic as Pacific Rim was kind of a shock to me.

Now speaking of Pacific Rim in general, there isn’t really much to this movie; it is very much a “what you see is what you get” experience. Now this isn’t necessarily a bad thing because if you see the poster for Pacific Rim and you think to yourself: “Wow, I can’t wait to see all of the cool character development and complex scenarios that challenge human views and ideals”, then you are not going into this movie for the right reasons. Pacific Rim has one thing: Robots fighting monsters. That’s about it, and that’s not a bad thing. But I still feel that I have to address the other parts of this movie, so let’s start with the story. Pacific Rim has a story that takes you from point ‘A’ to point ‘B’. Point A being a monster fighting a robot, and point ’B’ being a robot fighting a monster. The film will take you to these points, but it is very important that you don’t look too far into what you are seeing. I hate it when people say that a movie is great for “turning your brain off”, but its a point I have to agree with when discussing Pacific Rim. If you don’t “turn your brain off” while watching this movie, it will be filled with questions that lessen your enjoyment of the film (e.g. “Why didn’t they use the sword earlier?”, “Why does that one Jaeger have three pilots when the film made it clear that each pilot controls one half of the brain’s hemisphere?”, “How did they get back from the breach?”). On top of this story being rather lackluster, the film didn’t have as many giant robot fights as I would have liked. I starts off strong with a few, then the ending comes back even stronger with a few more, but the middle is all “story” and “characters” and it’s pretty weak if you ask me. Transitioning from this point let’s talk about the characters in the film, specifically the film’s performances. The performances in Pacific Rim fit into two categories: Good and Bad. On the “good” side you have people like Idris Elba who plays a tough leader with a heart of gold, Charlie Day who plays a wacky scientist who represents a more caring side for the Kaiju, and Ron Perlman who plays a black market dealer in such an outlandish way that you can’t take your eyes off of him. In the “bad” category you have pretty much everyone else. The film’s lead, Charlie Hunnam, is about as charismatic as a plank of wood. He is supposed to be the lead in this film, with a backstory that is actually pretty tragic, but the entire time I didn’t buy any of it. It was like I was watching the elevator pitch for this movie and the main character was continuously being referred to as “generic white guy”. It doesn’t help much that the secondary lead in this film, Rinko Kikuchi, isn’t much to behold either. Granted she’s better than Hunnam, but even the dog in this movie was better than Hunnam. This pairing creates the backbone for what is a movie that makes you repeat “Ugh, just get on with it!”. The plot is so basic that you know what is going to happen, and the performances (save for a few) aren’t able to save your enjoyment. So why are we talking about all of this shit then? Let’s get into what really matters: The action.

Pacific Rim is a movie about giant robots fighting giant monsters, so let’s talk about that. First off let’s talk about the best thing about Pacific Rim: The action scenes are fucking incredible. Seeing these giant robots fight giant monsters is everything I could have hoped for and more. The choreography, the effects, the ideas, even smaller things like the film actually realizing that consequences are relative (by that I mean, if a robot drops a weapon the robot is like “oops”, but everyone on the ground would die a horrific death), all of these things come together and create action sequences that are an absolute blast to watch. As a matter of fact, these action scenes were so good that they essentially excuse all of the bad things I spoke of earlier. I mean, it doesn’t completely excuse them but it at least takes the film to a net-positive. One thing that did kind of disappoint me, and this is partially going back to my Guillermo del Toro point, were the designs in the film. If Guillermo del Toro is known for one thing, it’s that his films feature brilliant character/creature designs. These designs are usually the highpoint of the film and are what make audiences remember their experiences. Now imagine taking that beautiful, macabre design philosophy and applying it to monsters that tower over literal cities. Do you have that amazing image in your head? Good. Now throw it away because Pacific Rim utilizes none of it. The Kaiju present in Pacific Rim are fine, but they’re nowhere near as cool as they could be. Most of them are just modelled after creatures that we already have on earth. Sure giant crabs are cool (I guess?), but imagine something from Pan’s Labyrinth but exponentially larger. That’s the movie that I want to see. The designs get a little better when looking at eh Jaegers in the movie, but it is still nothing groundbreaking. I did appreciate the subtle steampunk influence that is felt throughout this films universe, but it is just that: subtle. Sure there are cool things (Ron Perlman’s office comes to mind), but mostly it’s kind of uninspired. This brings me back to my main point (my thesis, if you will): Pacific Rim is a movie about giant robots fighting giant monsters; nothing more.

Overall Pacific Rim isn’t a bad movie, but it lacks a lot of the things that could have made it great. Instead of Guillermo del Toro being released to his full potential, what we got was a rather half-baked action movie that failed to more than scratch the surface of what we were seeing. The story was bland, most of the performances were bland, the creature designs were bland, but Pacific Rim did know how to make you have fun. The action sequences are (in my opinion) too few and far between, but each one is better than the last and makes up for almost all shortcomings in the film.

I give Pacific Rim a B